I visited Athens this week, home of the long running Greek tragedy without end. As a child, Greece was always on my short list of three must-visit countries in the world. I was a huge fan of Greek mythology and even named my kids after mythological heroes. I have visited Athens and the islands a number of times over the last 20 years and seen huge changes, in the former.

Twenty years ago the city's glorious artefacts were covered in graffiti and catching a taxi was an Olympian event to challenge even the most determined participant. Today, the artefacts are shown the respect they deserve (well maintained, well lit and protected from the unruly). Today, taxis will actually stop, speak to you and drive you directly to your destination in comfort. Twenty years ago, however, the Athenian Taxi Octathlon involved (i) running into the street, (ii) waving manically at the approaching vehicle, (iii) dodging its front wheels at the last moment and (iv) yelling your destination to the driver as he passed by. If his window was open, one at least had a chance of negotiating a ride. With windows closed, one had no chance (particularly as meek-mouthed foreigner). Assuming one was fortunate enough to (v) inform the driver of one's destination, the next event is the Octathlon was entirely in the hands of said driver. If he was heading in the same general direction as your destination he would (vi) stop and (vii) let you in. If he was heading elsewhere he would simply speed up with a dismissive wave and leave you bent over conversing with bare tarmac. The final event in the Athenean Octathlon was only revealed once boarding the taxi. It was not your exclusive hire. One would invariably find oneself (xiii) sharing with other persons and/or livestock heading in the same general direction. Who said the Greeks need to modernise? They had mastered the sharing economy way before anyone else. "Cuddle up!" was very much order of the day 20 years ago.

During this week's visit, I toured the Athenian Riviera, had a meeting and lunch in a mall next to the 2004 Olympic Stadium (where the Athenian Taxi Octathlon should have been an accredited event), had a kebab at Pita Pan, and drank a beer on a hotel rooftop overlooking the Acropolis, the Parliament building (with its John-Cleese-funny-walk guards) and Syntagma Square (the spiritual home of the Athenian Octathlon). 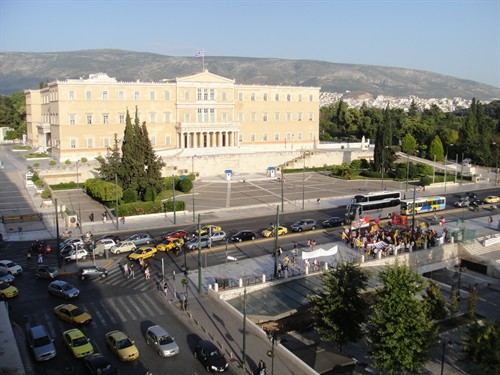 My visit coincided with a number of notable events in the region. Whereas Athens was baking in 36ᵒC, many countries just to the north and east were suffering from major thunder storms (including Tbilisi, where flooding at the city zoo resulted in escaped hippos ambling down main street and tigers attacking workers in a warehouse).

Even more seriously though, my visit coincided with perhaps the final throws of the ultimate Greek tragedy, the Grexit Saga. Walking and travelling around Athens, there were few signs of distress. The streets were busy, shops trading, restaurants serving and the traffic heavy. However, dig a little deeper and the locals will tell you they struggle to buy food and grandma's pension is worth nothing, forcing multiple generations to live under one small roof. That said, no one I spoke to wanted to return to the drachma and they all want to stay in the EU.

Although the impasse between the Greek government and its lenders seems unsolvable, the numbers do make one wonder how a country can survive under such stress: some €3bn was withdrawn from Greek bank accounts during my short visit (not in my suitcase I hasten to add, despite Stephen's insinuations); Greek bonds are over an eye watering 13%; the IMF is due a payment of €1.6bn by 30 June; and the average pension is just €700 per month. Surely with such data this tragedy without end must conclude one way or another soon. Although the sage of CNN, Dickie Quest, predicted the end by close of Thursday 18 June, at the time of posting this blog on Saturday 20 June the saga was still rolling on.