For my fourth trip in seven days (after Dawlish, Malpensa and Paris), we flew to Amsterdam from the best terminal building in the world, Heathrow Terminal 5. Compared to Schipol, T5 is pure joy. All areas are bathed in natural light and the gates are easily accessible. It is a tall majestic and very efficient building. Schipol on the other hand is a squat, flat structure that extends into eternity (more on this later).

Our meetings were held in an office park outside the city and a 20-minute drive from Schipol. They went well and we covered all items on the agenda, which gave us a little time to meet an old friend at the airport. He told us to go to the VIP Terminal, which is available to anyone willing to pay the surcharge. I congratulated him on his winning the lottery, only to be told he had not won and his departure as a VIP was thanks to a client.

We had a good chat in a private room and covered lots of ground. Percy and I left the VIP Terminal and walked over the road to the less salubrious CitizenM for a quick inspection. We asked to see a room and whilst we waited wandered through the public spaces. The public areas are not as big as those in Southwark, but still "work". One can see the inspiration for the Moxy. When the receptionist finally came to show us a room I had to run for the plane.

Signage within Schipol is a little better than Châtelet (see Paris blog June 2014), but the journey from check-in to gate is literally epic. Unlike T5, which is vertically arranged, Schipol is horizontally arranged and this means walking for England. I only just made the flight. Rather than return to the joys of T5, I flew into London City and enjoyed amazing views during our approach over London. Why can't all airports offer such panoramic views of their cities? Landing at Heathrow or City really puts you in the mood for visiting London. 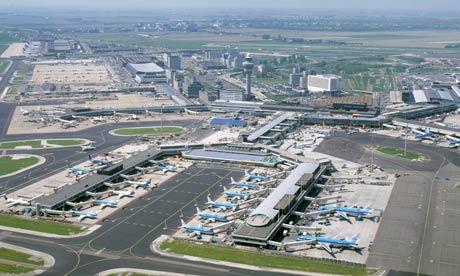