Recently I read that the ECB and US Federal Reserve are on the verge of terminating "Bin Laden" and "Ben Franklin" respectively (aka the €500 and USD100 denominated notes) over concerns that they are being abused by organised crime and that their removal would inhibit such persons of bad repute. The €500 was dubbed the "Bin Laden" because everyone knows what it looks like (large, purple and pink) but few have seen one, and crooks love its high-value, low-volume mobility. As I would like to see an elusive Bin before its demise, at Heathrow last week (en route to Athens for a long weekend with my daughter) I asked the money-exchange cashier if we could see one. The cashier advised that the note is not permitted in the UK and therefore did not have one to show us. He did, however, show us an even more valuable note, the CHF1,000, worth over GBP700, which begs the question: Why should the ECB and Reserve think that terminating their Bin and Bens will make any difference to global crime? Crime will find an alternative way. And, why should the UK ban the Bin and not the CHF1,000?

Following a good 10-minute chat with the cashier trying to fathom the money markets, my daughter and I had to dash for the flight. We flew BA, which meant another terrible inflight entertainment experience. Why can't BA simply use the same system as Emirates? On the outbound, the sound for the communal TV screens was poor and, on the return, there was not even an image - the whole system failed. The poor TV theme continued in our hotel, wherein the programming on the portal of the in-room high-tech flat-screen device did not match the actual transmissions and there were no channels for non-Greek speaking little girls (thank goodness for iPads!).

On the plus side, we were upgraded to a junior suite with panoramic views of Syntagma Square and the Parliament (no Acropolis view as too low). Breakfast was served in the rooftop restaurant and because Athens was bathing in a mini-heatwave (with February temperatures at a very unseasonably warm 22 degrees C) this meant the closed wraparound windows created a major greenhouse microclimate at our breakfast table - excellent conditions for warming our chilled English bones.

I love Cypriot food (which is rich in herbs, spice and flavour), but have never found Greek food to achieve high levels of culinary achievement. This visit did little to dispel this view: my eggs Benedict during our first breakfast scored a very low 2/10 on the Benedict Scale (and was the first time I have deducted points, for a very cheesy hollandaise sauce); our first gyros meal was dry and overly salty; a peperoni pizza had to spiced up with lots of chilly oil, which itself was less than hot; and on our final evening we went to a famous local restaurant (the type with walls covered in photos of celebs and politicos) and my moussaka was a tasteless block of colourless, featureless béchamel and meat (my daughter was also less than impressed, declaring that there was no way she was returning to the venue again).

Whilst in Athens, we visited the Acropolis (so good, we went twice), the Acropolis Museum (once), shopped in Plaka, ate salty kebab in Monastiraki, walked up and down Mount Lycabettus ("the hill that is walked by wolves" and is home to a tiny 19th century church), played in the sun in the National Gardens, travelled on the delightful and archeologically rich Metro, and watched the Parliament Building Guards in their skirts and fluffy shoes strut their slow motion routines. 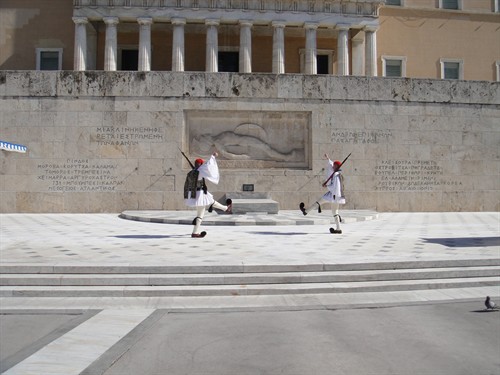 As we enjoyed the sights and suffered the food, the world around us continued to turn: the Danish team of one of our clients beat Manchester United FC (which for a Liverpool supporter brought enormous joy) and David Cameron struck a deal with the EU in devising a "special status" for the UK (to go alongside our "special relationship" with the USA, so that perhaps, when Scotland finally secedes, we should rename the UK as "Special Wales England & Northern Ireland", or SWENI for short, and Jack Regan can be made PM).

More seriously though, according to our friendly taxi driver, the economic situation in Greece is not improving, Tsipras is not delivering change and another election is likely (despite having held three already in 2015 alone). At one point during our visit, we tried to hail a taxi outside the Hilton Hotel (now finally officially for sale) only to be told that taxis outside the Hilton are for Hilton guests only - is such inflexibility a reflection of the root of Greece's woes? Sticking with the car theme, on our last evening we saw a continuous stream of men dressed in red running from a car park near Xenofontos to the Grande Bretagne Hotel and return driving expensive cars. It turns out this jogging line of red army ants was the hotel's valet parking service, creating havoc throughout Syntagma Square and its feeder roads. Surely there are better ways to run a country than to pander to the wealthy at the expense of everyone else.

I hope this blog does not give the wrong impression. I like Athens very much and I love Greek heritage. I even gave my kids names from Greek mythology. Greece has many wonderful positives (including some excellent wine producers these days), but it is frustrating when such a great country fails to achieve its true potential through inflexibility and deference.

Our return to Heathrow was delayed 30 minutes "due to the late arrival of the aircraft", delayed a further 30 minutes on Heathrow's taxiways due to high winds delaying take-offs and leading to congested stands, delayed another 15 minutes as the stand-parking guidance system failed, and delayed an additional 30 minutes at passport control due to insufficient passport staff being on duty (despite knowing that Sunday evening was the last day of the half term holidays and that kids are not allowed to use the e-passport lanes). Ah well, I guess no country is perfect and such imperfections are less easily dealt with than Bin and Ben.