Last Tuesday was Shrove Tuesday (the day preceding the first day of Lent, the Christian fasting period before Easter), aka Pancake Day in the UK and Mardi Gras ('Fat Tuesday') in other countries where they celebrate with a colourful carnival rather than frying flat, fat-inducing, easy-to-roll-up, doughy-filled parcels of heaven. In the absence of any such heavenly food in London I had to go all the way to Zagreb to partake of this seasonal delight.

I was invited to speak on a panel at a regional conference in the capital of Croatia. The BA flights via T5 were perfection personified, and there were no laser-beam delays (reference Virgin Airways' flight to New York on Monday 15 February 2016 that had to return immediately to Heathrow because of retinal damage to the pilot's eyes on take-off due to a laser attack from a nearby house).

My room in the host hotel in Zagreb was very comfortable, but I did have a couple of security concerns. Firstly, the in-room safe was not attached to the wall. It was not even attached to the cupboard. It was entirely loose and I could have checked out with it in my pull-along luggage, rendering it utterly useless. Secondly, the locking mechanism on my bedroom door did not lock the door handle and at some point shortly after my arrival someone very quietly opened the door whilst I was changing into a suit only for the door to hit the extent of the security chain. Maintenance came to successfully reprogram the door and protect my honour, but simply shrugged at the loose safe. I wonder how many of these safes are still in their rooms and how many have found a new home (further east in an oligarch's Moscow penthouse perhaps).

The conference itself was well attended, well organised and full of interesting people. Many of the delegates were from the region. My panel session was on the subject of Big Data and I recounted an experience from some 20 years ago when I advised a hotel operator in respect of profit improvement opportunities within a massive mixed use destination complex in Stuttgart. A key recommendation was that the complex should stagger the start times within the multiplex cinema and two music halls, thus spreading footfall over a more extended period of time. Well, you could have knocked me down with a limp pancake when one of my fellow panellists at the conference congratulated me on this strategy as some years after my intervention, as revenue manager for the very same hotel, he directly benefited from our sage advice. It is so nice to be patted on the back every once in a while for a job well done.

The organiser's dinner was hosted at Johann Franck's on the main square, and it was here that I had not one, but two courses with seasonally topical pancakes. My Croatian hosts had never heard of Pancake Day, so I suspect the appearance of pancakes was more by divine intervention than a desire to cater for this peculiar English peccadillo at this time of year. Regardless of the inspiration, the Croatian crepes were delicious.

Zagreb is a city easily walked and the many key features are arranged in a 'green' horseshoe to the south of the Old Town. The eastern flank has a number of art galleries in the landscaped gardens, whilst the verdant western flank is populated with elegant akademija  buildings and the State Archive. The southern rim is home to Zagreb Railway Station (once an important stop on the Orient-Express Train), the truly elegant Esplanade Hotel (dating from 1925) and the historic Zagreb Botanical Gardens (planted with over 10,000 species from around the world since 1889).

The Old Town on the hill is and feels far more historic than the lower lying centre of the city, and is home to a very curious collection of museums: Museum of Torture, Museum of Broken Relationships and Croatian Naïve Art Museum (yes, Naïve, not Native!). The sole remaining gatehouse into the Upper Town (The Stone Gate) now appears to be a drive-through church, with a crypt on one side and pews on the opposite pavement. A delightful, still working, 19th century funicular links the retail-filled centre to the Upper Town on the hilltop. Other attractive buildings in the Old Town included: the colourfully roof-tiled St Mark's Church (see photo below), the Croatian Parliament and Zagreb Cathedral. 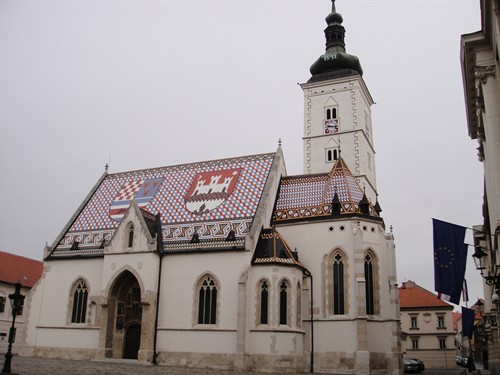 Zagreb and the conference proved to be so interesting that I failed to keep up with the news back home and only realised that an official bear market had hit world financial markets on 12 February the following morning before my flight home. Fortunately, the bears did not affect our return flight and the markets appear to be rallying already. Before I say a final farewell to Zagreb, I must highlight another positive - Zagreb Airport may be small, but, unlike T5 which still fails to heed my sage advice on the issue, it at least gets its toilets right, with Dyson Airblades in every facility. Vidimo se opet uskoro Zagrabe!