The first half of these tumultuous seven days were quiet for me. Not least because my girls were off travelling (darling daughter to the Caribbean with friends and wonderful wife to NYC for business) and I was home alone with my boy. Second half of the week was much busier, with a three-day whistlestop tour of fabulous hotels west of London. My tour began with a short walk to a car hire place in the bowels of Paddington, an underground car park alongside the tracks that seemed to stretch halfway to Heathrow. I was upgraded from tiny-mini to mini and my very little, highly unpretentious mini turned out to be a very non-descript white VW Polo, that looked as weak and feeble as a 45-day old iceberg lettuce. Was I in for a surprise! The Polo turned out to be a pocket scud missile. It had a great little engine with amazing poke for such a small car and the most amazing second gear (I could start off in 2nd and at 40mph still have pull in the same 2nd gear). The best little hire car I ever had (and certainly not Trussesque).

On our first, super sunny, day, the best little hire car and I, inter alia, visited:

On our second, monsoon rains, day: 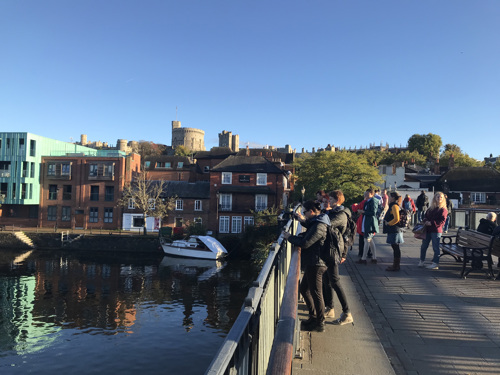 On our third and final miserably grey day:

The best little hire car flew around the counties in all weathers, no problem. It handled twisty country lanes, flooded farm tracks and congested motorways with equal aplomb. Its plucky engine got me out of trouble a few times and ate up the miles, all whilst we followed the political implosions of the Conservative Party. By the end of our tour, the white was a very distinct shade of brown. Our final mission was to pass by Heathrow on Friday night to collect my wonderful wife on her return from NYC. I was very sad to give back the best little hire car. The car hire chappie did do a bit of double take when he saw the colour change, but let me go with no additional charges.

And finally, after Coworth Park, due to an accident blocking the way west, I had to go east and queue for 30 minutes to access to the A30 back to London. Blow me over with a puff of wind, but right there on the left were Roman ruins. Did the Romans live here? This far from the comforts of Central London? A search on Google Maps listed them as ‘Roman Ruins Leptis Magna Ruins’. Now, I have been to Leptis Magna and I can tell you for sure, Leptis Magna is not in Surrey. It is in Libya and it is stunning and it is immense. Further research, however, revealed that the columns and capitals were indeed genuinely Roman and were brought here from Libya to create a folly for the royals in the 1800s. Such follies aside, I am curious to see what further follies the Tories will get up to. Can BoJo really be recycled like a bunch of Leptis Magna marbles or old manor houses into hotels?