Gatwick at 06.30 on Monday morning was packed. All the security stations were open and facing long, snaking queues of impatient travellers grumbling at the slow flowing streams of people. It was hardly peak holiday season (well passed half term and the Easter break was still some weeks off), so I had some difficulty in pinpointing the reason for such crowds. Maybe it was simply 'first-flights-of-the-day-nervousness' and everyone had turned up early, or the new security layout and systems were not working as efficiently as their designers had made out to Gatwick's owner, or maybe it was because the North Terminal is now the EasyJet terminal and it was simply sheer weight of numbers. Either way, the new set up needs more time to wash people through and a top tip for any traveller using North Terminal is to now allow for that extra time.

Being the European hotel investment industry's largest annual shindig, my plane was stuffed full of delegates and on landing I hooked up with a banker and a valuer, and we agreed to share a cab into the city. Note to self, when sharing a vehicle don't forget to share the cost too or choose fellow travellers with looser wallets.

As we booked so late, this year we did not get into our usual hotel. Nick found room at a hotel called Grim's, located in Mitte. The only reasonably priced hotel I could find within reasonable walking distance of the action was an internationally branded property that was genuinely grim. Whereas Nick's hotel had style and panache (with theming based on Grim's Fairy Tales, a Motel One with personality if you will), mine was a good example of a bad choice. For a start, the hotel proved a little difficult to find initially, not helped when a local chap directed me towards the Axel Hotel in the opposite direction. I am not sure what he saw in me or my walk that led him to direct me to the Axel, but let me tell you, this hotel is not everyone's cup of tea (by all means visit their website if you want to know more).

My hotel was three-star rated, flagged with a conversion brand, and utterly devoid of personality and dated from a time unknown. The room was small, the window was small, the WiFi was weak and the desk designer needs to go back to design school. For all its physical shortcomings and as a prime example of a brand taking on anything (so much for the sanctity of brand standards), the staff were excellent.

Our beer and sausage dinner proved to be as popular as ever and thanks very much to those who joined us for finding the time and making the effort to head east. Being Berlin, meals and beers are de rigueur and for some reason Aigner on Gendarmenmarkt has become a top choice venue, whereby two of my three lunches were hosted there.

In amongst all the meetings, meals and beers, I was interviewed briefly by an American called Glenn Hausman for his podcast on the subject of aparthotels. Good job we had a quick chat before the camera rolled, as he kept referring to our company as Whitebread! Maybe he was confusing us with Whitbread, which is quite flattering given the differences in scale.

During the afternoon of the last day, I took a couple hours out to do some sightseeing, which in 16 years of attending the Berlin conference I had never done before. In fact, the last time I went sightseeing in Berlin was in the spring of 1989, just before The Wall came down. Back then West Berlin was a fun city and we had to pass through Check Point Charlie to see the rich history of East Berlin. Today of course, the whole city is easily accessible. This trip, I walked around the outside of the Reichstag (a magnificent historic edifice, topped with an iconic, Foster-designed, glass-domed viewing gallery); strolled through the Memorial to the Sinti and Roma Victims of National Socialism  (very moving, especially on a grey, grim March afternoon); ambled under the Brandenburg Gate and peered at all the embassies that cluster around this world famous landmark (strange how it seems smaller close up than it appears from a distance, usually viewed from a passing taxi or on TV); and played peekaboo with other tourists in the Memorial to the Murdered Jews of Europe  (aka the Holocaust Memorial, definitely a must see and to be experienced area of Berlin, where 2,711 concrete blocks of the same footprint but varying heights stand on a linear grid covering 1.9ha of undulating ground - a little like Stonehenge on a wavy sea). 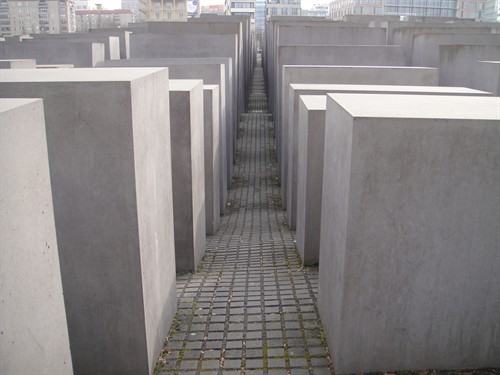 I walked back to my hotel through Tiergarten, the 210ha inner-city park (versus 142ha of Hyde Park) where German Electors kept private hunting grounds and during the Berlin Blockade people grew vegetables in 2,550 plots. The park feels far more natural than Hyde Park. Where the latter is highly landscaped and beautifully maintained, the former is more wild, forested and has a major mole problem. As if to confirm its name, as I left Tiergarten ('animal garden') I saw a man walking a pig. Yes, a pig. A pretty little thing that trotted along like a ballerina on its four points and grunted contentedly at its luxury lifestyle as a household pet.

As I approached my hotel to grab my bags and head to the airport, I decided to scratch a long term itch. What does the back of KaDeWe look like? I walked around KaDeWe thinking it could be like Harrods in London or Galeries Lafayette in Paris. As it turns out, the back of KaDeWe is not exactly Knightsbridge or the 9th Arrondissement. The buildings back there are just as dull as the majority of West Berlin and not a patch on the magnificent front of the store. More disturbingly though, round the back there and across the street was the hotel I decidedly could not get away from this trip, the Axel.

Despite the threat of Berlin airport strikes hanging over us throughout the conference, my return was quick and simple, and I even shared a taxi with a fellow hotelier who, we discovered, lives just a few doors down from me in London. He offered to pay the fare, but perhaps his blog will end with a note to self whereby he too should share a ride in future with the owner of a looser wallet. So ist das Leben!