This year the first week of our annual holiday coincided with the second week of Rio 2016, and, being in the Olympic spirit, I set out on a program of my own mini-triathlon: 30 minutes of floor exercises, 30 laps of the pool and a 15-minute run from pool to home each day. My modest exercise regime was going great until the morning of our drive from Yaya's flat in Nicosia to Paphos, when the innocuous action of turning a suitcase on wheels resulted in a pulled back muscle and debilitating agony. I manned up through the pain and drove us to our hotel in Paphos (the same hotel for 14 years running), where unfolding my body from the car was something of a challenge. My lovely wife insisted I have a massage to try to relax my back, an instruction I duly obeyed, and succumbed to my first massage, which became three in five days.

After the first massage I spent the remainder of the afternoon lying in our hotel room under a pile of duvets and pillows to keep my back muscles soft and warm against the cold wind of the hotel AC, watching hour after hour of Olympic show jumping (and after all those hours I still missed the finale and Nick Skelton's first gold medal at 58 years of age). For the next few days I had the flexibility of a frozen cod, moving more slowly than the Olympic action replays, until the massages and pills kicked in and some movement was restored.

Encumbered by the stiffness and fragility of a Weetabix, my ability to execute the art of umbrellology was severely compromised and my pupils had to step in. For the first time, my lovely wife followed and implemented with some degree of success my precise umbrella-sun-lounger-manipulation advice. Even my son got in on the act and tried to qualify for his umbrellology GCSE.

In Nicosia, the usual Hilton pool personalities were on varied form during our daily visits. The Hairless-wonder only appeared during our first few days. The Tricoteuse also attended less regularly than usual, except for the Standing Tricoteuse-In-Chief (aka the STIC), who was there every single day in her reserved spot. A noteworthy new pool personality was the Human Wave-machine, appearing for a few days only. His butterfly in particular was so extravagant that poolside persons had to raise their voices to be heard above the thunder-clapping of his limbs through the water and the tsunami waves were enough to render my otherwise fish-like daughter stranded by the pool's edge until the waters subsided.

The Tricoteuse went into overdrive the day an infant pooped in the big pool, laying into the staff and anyone within hearing range, complaining about lax parenting and lax bowel movements in their precious water. The day a child pooped in the baby pool did not cause such a hubbub, because of course the Tricoteuse would not be seen wet in anything other than their sacred big pool. I am not sure what was in the water this year, but we had a third poopy pool incident during our time in Cyprus, this time in Paphos where there were no Tricoteuse, no ruckus and the pool users simply adjusted without comment and made good use of the other available pools.

Poopy pool water was nothing compared the entertainment the STIC provided on another afternoon when a group of kids started diving for a small plastic water bottle in the sacred pool. The STIC went ballistic at the poor darlings and the Israeli father on his sun lounger rose to the bait and gave as good as he got. It was priceless viewing. Like watching two lions fighting for the moral high ground. It was only a shame our entertainment had to be curtailed when the father left to put his baby to sleep before the manager arrived to poor oil on troubled waters.

Keeping with the water theme, what is it with Cypriot showermen? In 1998, when we lived in Cyprus, I visited and was an overnight guest of the newly opened luxury Anassa Hotel near Polis. In the morning I enjoyed a fabulous shower only to open the shower door and find the bathroom floor under an inch of warm water. The pitched plinth under the shower door had been cemented in place with the pitch pointing outwards instead of inwards, thus channelling all the overspray out into the bathroom and not back into the shower. This summer Yaya had her bath converted to a walk-in shower and the showerman installed a screen that is too short and without a lip or gradient to stop the overspray from flowing into the rest of the bathroom. It is the only shower where one shares the space with a bucket and mop. My lovely brother-in-law must have used the same showerman as his new shower looks exactly the same (minus bucket and mop). The curse of the Cypriot showerman had also struck some of the beautiful new villas at Limassol Marina: showerheads in the middle of the cubicle and the screen only covering half the area; fully screened showers where the doors were so narrow the target client, wealthy Russian patriarchs, are going to have to look a little less prosperous if they are to make it in and out in one piece.

This year our little Rover 214 (which we acquired when we emigrated to Cyprus in 1997) celebrated its 19th birthday and is owed the highest praise. It managed to haul us and our luggage from Nicosia to Paphos and back again, and to carry me to Limassol and back for a quick tour of Limassol Marina. Aside from the odd shower issue, Limassol Marina is a job well done. I loved the classic feel of the residential streetscapes, the mix of F&B outlets (including an offshoot of the best fish restaurant on the island, Pixida). Not to be outdone, the city's old marina next door has also had a makeover, including some stunning F&B outlets in raised glass boxes over the quaysides. The quality of Limassol Marina is very much in keeping with the high standards sought by its developer, who previously realised the landmark Aphrodite Hills complex. Their next project looks to raise the bar even higher, The Oval (no relation to The Oval in London, previously reviewed by your blogger), a stunning, curvaceous, 16-storey apartment complex in the centre of Limassol. 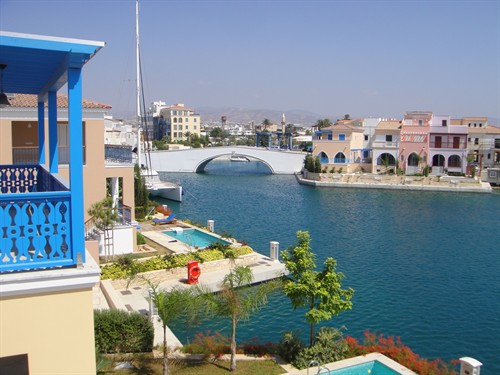 Driving around Nicosia in our star-of-a-car, it was clear that even more shops are vacant and available for rent. The only high street segment that seems to thrive in this sluggish economy is the coffee shop. The Nandos restaurant has become a coffee shop and even the periptero nearest the Hilton has succumbed to the coffee shop contagion. The situation is so bad that even the Bond Street of Nicosia now has vacant units and, even more shockingly, one of its largest units is now let to Lidl. Imagine, Lidl is now paying one of the highest rents in Cyprus. Imagine, a Lidl store opening on Bond Street or the Champs-Elysees? This lovely island still has a long way to go in its economic recovery. The reasons given for such retail malaise are that consumers have now spent their savings (which kept the retail economy on something of a lifeline for a while) and are maxed out on debt.

Our final day was heralded with a short rain shower and rolling thunder in a two-toned sky, grey and brooding to the northeast, serene and azur blue to the southwest. Our evening return was marred by a sequence of unfortunate events: (i) a delayed departure from Larnaca (due to the inbound aircraft having been late for the outbound from London because it was late leaving Venice the day before, or some such story, and who can blame anyone for delaying their departure from the stunning one-off that is Venice); (ii) a cancelled Cairo flight at Heathrow on our arrival (meaning all the wheelchairs were in use and none left for Yaya); and (iii) an understaffed late shift failing to cope with the volume of luggage being off loaded from two aircraft simultaneously. Despite the sequential delays and miserable September weather in London, it was good to be home.