After two years of no foreign holidays and of not seeing her family, this August, we made it to Cyprus for vacation and in-laws family time. My lovely ladies checked-in by way of First Class (thanks to my wonderful wife's Gold status) and enjoyed a slap-up breakfast in the 'Lounge', darling. I went through cattle-class entry and met them an hour later (slap-up breakfasts in the 'Lounge' cannot be rushed, darling). When we were re-joined, it was my turn for feeding. LHR T5 was quite busy, especially surprising given all the travel restrictions, and there was a 20-minute queue for Gordon Ramsey's place (note: we arrived over three hours early for our flight, in anticipation of check-in and security delays, only to find there were none, thus leaving plenty of time for breakfasts, darling). Gordon's Eggs Benedict performed poorly, scoring a 3/10 on the Benedict Scale (it is a continuing mystery to me that posh places just cannot execute this dish).

Our outbound was full (again airports and airplanes seem exempt from social distancing). There was no TV for the 4.5hr flight and we took off late (although I was interested to see our push-back tug was a remote-controlled tug, no driver in sight). In the absence of BA-provided entertainment, my delightful daughter allowed me to watch RED with her. I cannot remember what inspired me, but during the movie I suggested to my delightful daughter, who loves superhero movies/characters, an idea for a new superhero. My delightful daughter and I often have random conversations, especially about superheroes. Anyway, my idea was to produce a superhero movie featuring the latest in high quality superhero material - the Man-eating Dustbin! "Defender of the Weak, Protector of the Poor and Disposer of Baddies." Maybe, it was the dustcart on the apron at T5 that I was mesmerised by during our delayed departure that inspired me. Whatever the catalyst and despite my delightful daughter's severe doubts, I think it might catch on.

When we landed, ours was the only aircraft on Larnaca Airport's apron. It looked utterly deserted from our plane. We disembarked and a control bod on the air-bridge told us to go outside, into the searing heat and soggy humidity, to get a PCR test for our unvaccinated daughter. The test centre was in the open bowls of the terminal building, effectively outside and fully exposed to the heat and humidity (there was shade, but no breeze in those dismal dusty depths). Fortunately, because there were no other planes the Tensa Barrier snake was fairly empty and we were done in about 20 minutes. During those 20 minutes, however, lots of other aircraft started to arrive and the snake filled rapidly (only one girl testing did not help with the flow of course). I would hate to be stuck in a long snake in such oppressive heat for too long. What a poor first impression for tourists to the island of love. Why can't they find a space inside the terminal, with air-conditioning? It was hardly busy.

Just a day before leaving for Cyprus, much to my relief and good health (my wonderful wife would have killed me if I had been left behind), my new passport arrived, and I had it christened with a Cyprus stamp. One of the joys of Brexit is going to be passport stamps everywhere I go. My previous 'chunky' passport took eight years to fill. This new 'chunky' one will be done in two years at this rate. Thanks, BoJo. Still, at least HMG Passport Office will earn more money this way and thereby boost our economy. All part of BoJo's cunning plan make us an economic superpower no doubt.

In Nicosia, we checked into Yaya's apartment and used it as an isolated base for our first week, during which my wonderful wife and I worked much of each day, tried to hit the pool for a bit and generally stayed away from most folk. We had a big family dinner at the end of the week and melded thereafter. Yaya's home was not the same without Yaya.

The pool we hit, as ever, was that of the former Hilton, now The Landmark. It is evidently a space where time stands still. It was still furnished with the same limb-amputating sun loungers, unreadable clock, and regular folk (inter alia The Hairless Wonder, Stick Insect, Dolphin, Oak Man and the Tricoteuses). It was as if we had never been away. There was one new character of note though. In order to gain entry to the hotel, one had to show one's Safe Pass (a requirement everywhere in Cyprus) to the jolliest Jabba The Hut you could ever meet. Around the pool we heard that the hotel was soon to leave its time capsule and close for refurbishment. With luck, the limb-nipping, face-crunching, back-breaking, finger-chopping sun loungers will go post-refurb. In a fight against a troop of Special Forces these lethal loungers would no doubt win. Post pool posting, perhaps they could be deployed on the Green Line, thus saving the UN and Cyprus a lot of money (and render National Service redundant), and they would be a far more effective deterrent than mere human combatants.

Driving around Nicosia, we noticed the many new roads. Clearly the local authority had some spare cash during C19 and spent it on the empty roads of the city. My favourite road, Kyriakou Matsi (not only because it was where my office used to be and is home to my favourite wine bar, but it was the prettiest tree-lined street in the city, leading to the Presidential Palace) just got better. It was made even more pretty following a comprehensive remodel: now with pavements (much safer to walk along), new trees, little gardens, comfy seats and wonderful lighting at night (including snazzy road-imbedded flashy cats-eyes lining the zebra-crossings and up-lights for the historic sites). Stasikratous Street was semi-pedestrianised and looked very cool (somehow combining modern clean lines with old elements). Not so great was the newly completed national square, Eleftherias Square. This ancient gathering place is now jarringly modern. The local press hated it and identified the benches as a gathering of suppositories, which was quite a good parallel, but they are somewhat larger than modern medicine might recommend (better suited to larger hairy-bottomed Crusaders of old, perhaps). Ref photo below, judge for yourself. 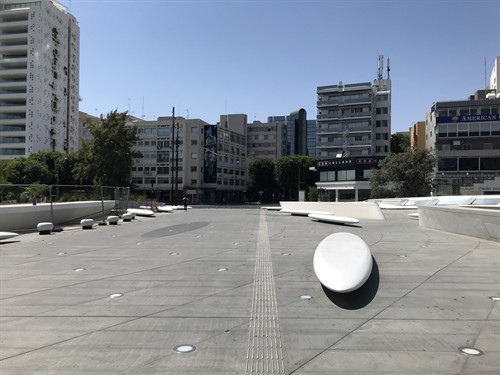 We also noticed that the city skylines of both Nicosia and Limassol were becoming very congested. A race to sky was in full swing, with multiple skyscrapers under construction and some even completed and occupied already. Projects included Stark Tower in Nicosia (all they need now is Hulk to hang off the side) and a The Ritz-Carlton Residences in Limassol (no hotel, just residences for sale). Against this backdrop of conspicuous investment, the old town of Nicosia was looking very sad. Many shops were vacant and those that had remained open had very little stock to sell. Whilst away, I read that 82% of department stores in the UK had closed since 2016. Where is retail heading?

One evening we celebrated our anniversary at Domus Restaurant, which sits opposite my wonderful wife's high school (undergoing refurb again) and the Archbishop's Palace (which now has a display of classic despots' cars in a glass-walled garage out front). Speaking of despots, more conspicuous investment was underway behind the Palace, in the form of a new, very dull looking, national cathedral (presumably to replace the tiny gem that is Ayiou Ioanni).

We had only two grey days (probably the residual cloud front that flooded Turkey the day before, resulting in 81 deaths). Otherwise the weather was glorious, with a consistent 35-ish degrees C. That said, there were much darker skies brewing over Afghanistan, with the Allies' immodest scramble to leave the country in resurgent Taliban hands.

Other notable events included: witnessing the aftermath of big car crash near Yaya's house (reminder of FCDO travel advice for Cyprus: 'Driving standards are poor. Drive with great care.'); our little Rover was still running at 25 years of age (if increasingly thirsty); met Seth for coffee (he agreed that the triple-nipple artwork in our Paphos hotel room was beyond odd); lunch with the Introducer at Pralina on refurbished Stasikratous Street (now owned by Zorbas Bakery, which seems to own most of Cyprus these days - there is clearly money in dough); after 17 stays over 18 years at our favourite hotel in Paphos, we had our first meal in the fine dining Italian (thanks to Luigi for being such a great host and to Yiannis for all the empties).

After many hours of testing, form filling, printing and photographing, I managed to check us in to our return flight home. Loaded with all the necessary forms and print outs, we checked in at Larnaca Airport, queued with the crowds for passports, security and food, and boarded a packed flight. Again, no TV. But we did land 20 minutes early. But to no benefit. T5 was closed due to a security alert and we had to wait on stand for 30 minutes before the air-bridge was connected and we were allowed to disembark. After that, we fairly flew through T5 (no queues, no checks, all luggage in place). And so, it was 'Yassas Kypros' and lasting memories of Jolly Jabba, new streets and towers over heritage.