Despite Ciara, Dennis, coronavirus, the biggest explosion since the Big Bang (so big it left a giant dent in the Ophiuchus galaxy cluster) and Brexit, I managed to go to Dubai this week. Sunday evening I was escorted to the Heathrow Express by my wonderful wife (a frequent user of the Express until her garden leave of recent months, but rarely attained on foot). We had to walk all the way because of a Bakerloo Line workers strike, which meant our local station was closed off for three days over the weekend.

Key to a quick airport experience is to check-in online and travel with cabin luggage only. Thus, within 50 minutes of leaving home I was dining on Eggs Benedict and Caesar Salad at Oriel Café in T3. Of the food: one perfect egg, one overcooked egg (Eggs Benedict with miss-aligned eggs is like having one good wheel on a scooter, they just don't quite do the job), with a paltry scored of 4/10; Caesar Salad with green beans (what is that all about?).

Whilst munching on generally good food in T3, I glimpsed moments of Arsenal making heavy going of Everton and got to pondering, "What a weekend of sport!" France beat the champions Wales in Cardiff (is the Grand Slam on?). Tyson Fury smashed Wilder at home in Vegas (AJ next?). Next thing you know, Liverpool might even win the Premier League this season.

Flying in an Emirates A380 is a pleasure, and such a pleasure was afforded to me again this trip. Hence, nothing to report, other than a sense of pleasure to have flown such a pleasurable experience. Even my seat-neighbours were pleasant and respectful of space.

Where the air-side of Dubai's air travel industry seems virtually faultless, the land-side could do much better. Dubai International Airport has to be one of the worst planned facilities. Not enough WCs (and those that do exist have far too few cubicles for the numbers of visitors), no seating (lots of people sprawled across the floors, including yours truly, slumming it against a plastic palm tree for an hour), crushed shopping and the longest immigration queues on arrival. Hopefully, they will have more passport checkers and more desks for Expo 2020 (assuming coronavirus does not affect such matters come October, as it has affected IHIF in Berlin this year). Could it be that the same designer of Dubai also designed the new airport in Istanbul (see blog for Dushanbe (12.19) - limited seating and lots of retail? Surely it would be more seemly for passengers to be seen sitting on seats rather than splashed inelegantly all over the floors (also, hygiene, viruses, etc - ring any bells?). For how much longer do we have to endure the linear listlessness of DXB? When will the new Dubai airport open? And, above all, will it have some seats and more interesting dimensions?

Despite my slow airport exit, my hotel room was not ready on arrival at 09.00 and I finally gained access to a shower at around 10.00. First meeting was at 12.00 at Kempinski Mall of the Emirates, just a three-minute walk from my hotel. Looking out from my bedroom window and walking around the area, it was to me remarkable just how many mid-market hotels have sprung up around the Mall. I still recall that in 2005/06 (when we were master planning large chunks of Dubai) when we advocated more select-service and mid-market hotel development in the Emirate, we would laughed out of school and told to do our homework again. How time has moved on.

Post long first meeting, we popped into the Mall and partook of a late lunch cum early dinner at a venue called Cheesecake. We all had fried chicken. Cheesecake does serve cheesecake, but is most notable for overlooking the bottom of Dubai Ski. I am sure that in recent years that have they shortened the piste, because now at the bottom of Dubai Ski there were a range of weird and wonderful looking 'rides'. So, as a diner in Cheesecake, you don't so much see skiers any more, more kids and crazy adults rolling around in tyres and bouncy spheres.

In recent years, I had heard, if any such statistics exist or could be relied upon, that Dubai has been feeling the slightest nip of austerity. However, based on my visit this week, there did not seem to be any nips going around. The roads were reassuringly jammed, cranes scraped the sky, builders built, hotels were full and Malls flowed with shoppers. There was no sign of distress in this dynamic desert dynasty. In our hotel, we had fellow guests from all over the world: Europe, Asia, Africa, Americas and even an Aussi couple.

Next day I was woken by the clicking of the hotel's external cladding. It would appear that the walls of the building click in the morning as the sun rises and the heat builds up in the cladding, and then again in the cool of the evening. One just hoped that the stuff didn't catch fire.

After a workshop, we headed out to the newest Crowne Plaza, at Dubai Marina, and discovered that the first Crowne Plaza in Dubai (on Sheikh Zayed Road) was to be redeveloped (I had noticed the ground floor F&B areas were screened off and that some bedrooms windows were broken). I remember when this building was in construction and just a few months from opening in 1993/94, and after my meeting with the opening GM I'd had to walk half a mile through the sand dunes towards to beaches to find the nearest road and thereby a taxi to take me back to Deira. Sheikh Zayed Road back then was a much smaller affair with few taxis. How times have changed.

The drive to the new Crowne Plaza was interminable. To drive from the Kempinski Mall of the Emirates to our hotel (a three-minute walk remember), took over 15 minutes by car. Dubai is designed around the car and yet, getting around by car takes an eternity. The roads are too big, the junctions are larger than the Ophiuchus galaxy cluster and there are no short cuts. Truly an example of US master planning around the motor car and not around people simply seeking to get around.

My travel companion had been to Dubai a couple times before now, but he had never seen much more than the inside of the Kempinski. He wanted to see some authentic Dubai. So, I took him to Madinat Jumeirah for a stroll and dinner. We enjoyed a little pedestrian stimulation (rare in Dubai) and ate within the glow of the light show that is the Burj Al Arab. 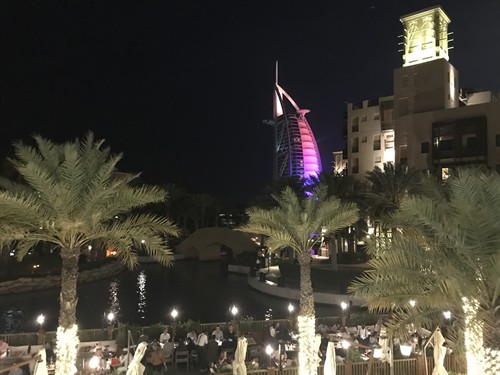 On this trip, we toured: the new Crowne Plaza (very efficient design, small lobby, overlooking the marina, huge/thick meeting room doors and tight up against adjacent towers); Kempinski Mall of the Emirates (small lobby, great suites whose views are elevated panoramas of Dubai Ski, no ballroom, a range of meeting rooms across a vertiginous bridge, WCs turned into a tapas bar and the added thrill of a fire drill during our meeting); and Emerald Palace on the Palm (outrageous, golden, imperial, lush, opulent, magnificent).

After our final meeting, the team had a last supper before departure. In two cabs we crawled our way to DIFC and came to a standstill some distance from the entrance we needed. The traffic was literally a car park and the noise a concerto of raucous honking (financiers trying to exit their office car parks and clashing against waves of visitors trying to disembark taxis and limousines at the entrance to the dining emporium on the roof terrace of the complex). Eventually, we got out of our taxis and walked the rest of the way to the mobbed entrance. Could this be clever US master planning at play again? Why were the pick-up, drop-off, car parking exit and entrance, entrance to the Four Seasons Hotel, entrance to the food-scape on the roof, and a significant road junction, all positioned within the same few square metres? Due to the ensuing ticking clock, our supper was a little rushed, but the food delicious. If you have time on your hands and can get there before expiring from hunger, do try Roberto's at DIFC.

Thereby this week, I passed through two of the world's busiest international airports and in neither was I checked for flu systems or temperature. The passengers and staff mingled freely, and very few people wore masks. I would have thought airport staff at least would be granted some sort of protection as standard issue in these coronavirus rampant times. Let's see how your blogger fares over the coming weeks. Anyway, I landed safely at Heathrow in the morning rain and walked home from Paddington in the snow. Yes, it snowed in central London this week folks. Real snow. Not Dubai Ski snow, with cheesecake-eating onlookers.