Today, Star Wars Day, was my first 'business trip' in nearly two months of lockdown. I had to show a surveyor around a site in Mayfair (who said luxury travel would be slow to recover?). A visit that just could not wait for Boris to lift his restrictions. So, after a morning of Whatsapping and Zooming and regular old phoning, I caught my private limousine (otherwise known as the number 6 bus - it was empty, but for me and the driver) to Hyde Park Corner.

The #6 goes from near our home, down Edgware Road and Park Lane, before turning east along Piccadilly. We often use this limousine service to shop for our big-shop of groceries and sanitary stuff at the local Waitrose on Edgware Road, so a well-frequented short route in these lockdown days. Over the last week or so we have noticed Edgware Road getting busier, both in volume of cars and people. Today, it was busier than ever we have seen it in lockdown so far. It may even be the busiest street in the whole of the UK at the moment. Why? Edgware Road not only has a good-sized Waitrose, but It is a virtual continuous ribbon of supermarkets, banks, pharmacies, grocery stores, takeaway joints, optometrists and a plethora of other 'authorised' retailers. Thus, lots of good and genuine reasons for people to wander and accumulate along its length.

This afternoon, the queues outside the supermarkets and banks were especially long. Amazing how people need to do stuff come a Monday.

At Marble Arch, my limousine sailed curvaceously around the old arch (originally erected as part of Buckingham Palace in the 1820s, as a triumphal entrance for its royal residents, and moved to its contemporary and eponymous location in the 1960s) and glided south down a disconcertedly deserted Park Lane. A quick glance from the apex of Marble Arch east down Oxford Street revealed a street busy with buses, but few pedestrians on the pavements (most shops were closed). The buses were to be expected as everyone of the multitude of bus operators in London wants a route through this king of shopping avenues, even when the shops are shut it would seem.

The grand hotels of Park Lane were all closed and shuttered, with the busiest spot being the sole gas station about halfway down (an authorised retailer). At Hyde Park Corner, I disembarked and walked past the hushed Hilton, dormant Dorchester and forty-winking 45. The day was glorious. Strong sun, 17C, light breeze, no pollution, birds singing clearly in the trees and virtually no people. The only folk out in force were builders, maintenance guys and white-van-men. The building sites along my route were all hives of activity (also an authorised activity now).

Before accessing the building that was the purpose of my business trip, I had to walk around the back of Berkeley Square to sign out the keys from a security office. Berkeley Square was as rarely seen. An idyllic oasis of calm. Few cars, few folk, lots of open space, greenery, birdsong and fresh air. Wonderful. 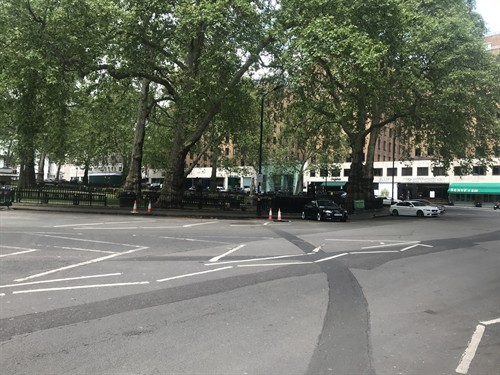 Keys secured, access to building achieved, my visitor and I inspected the parts that needed inspecting and were fortunate to gain access to the basement thanks to one of the tenants being present and willing to let us take a look around. My visitor turned out to be combination of Superhero-cum-Jedi-Knight. Although he did not wear a utility belt, when he emptied his pockets for the wall climb, the contents would have put the Dark Knight to shame. He clambered up the back wall, shimmied sideways along the side wall and leapt about the flat roof like Spiderman. And finished off his impressive performance by flashing his lightsabre at a windowsill (some kind of Disto laser-measuring device). All highly fitting for Star Wars Day.

We finished up and Superman left in hyperdrive aboard his white Falcon. I signed back the keys and walked back to Park Lane for my return journey in my red limousine. Hyde Park had a few folk in it, including quite a few Boris Bikers. The wonderful weather and lockdown discontent were clearly drawing people out. The weather in April and early May this year has been amazing. In fact, April was the sunniest ever on record in England. Perhaps the earth is rewarding us for reduced emissions and for being more considerate to others in these otherwise dark days.

Rounding Marble Arch, I noticed a herd of elephant statutory on the grass by the fountains. One big mother (or father) and a gaggle of 20 bonsai-sized offspring. I had never noticed them before (they were installed in December 2019). Just goes to show what a more relaxed approach to business travel can reveal. Anyway, after my longest journey in nearly two months (all of a 15-minute bus ride), Star Wars Day came to a quiet end, with plenty of time to think back on my youth and how, in 1977, there was a new hope in a galaxy far, far away. Rest assured that today, there is hope for tomorrow here on Earth, as demonstrated so amazingly by our new Superhero, Colonel Tom. Be careful out there. Stay safe. And may the force be with you all.