We are working on an exciting deal at the moment, which necessitated a visit to the relatively new airport of Malpensa (opened in 1997), 40km outside Milan. The airport was very quiet for what was intended to be a strategic new hub for Italy and its commercial capital. Opposite Terminal 1 is a very large and curiously designed Sheraton Hotel. Among the curiosities were the space-age silver curtains that covered many of the windows, which entertained my colleague, Percy, to no end.

During our time in Malpensa, we were fortunate enough to visit the new Moxy hotel at Terminal 2, the first one of Marriott's new budget brand (opening September 2014). It feels like a cross between a CitizenM in the lobby and a souped-up Premier Inn in the bedroom - a very appealing combination that should work really well.

It is a shame the original vision for Malpensa has failed to materialise. Passenger numbers are well below expectations since Alitalia pulled out in 2007/08. Today, the largest carrier is easyJet, which has created one of its largest European hubs at Terminal 2, opposite the Moxy.

When the airport was conceived, the authorities asked local residents in the village of Case Nuove to sell up and move out. Some did and some stayed. As a result the village is a mix of boarded-up homes, empty streets and a hand full of residents. Not quite a ghost town, but close. A very peculiar place.

Our departure was fairly straight forward, but I have to say the duty free areas are just as peculiar as Case Nuove ('the town that developer's forgot') and nearly as curious as the Sheraton. On the one hand, there is only one duty free store and a kiosk, both with little to offer. On the other hand, as you move through the dingy corridors to the gates all of a sudden there is an arcade full of super luxury boutiques. Maybe the works that are underway at the airport for Milan Expo 2015 will resolve some of Malpensa's issues and improve not only performance but also the departure experience. 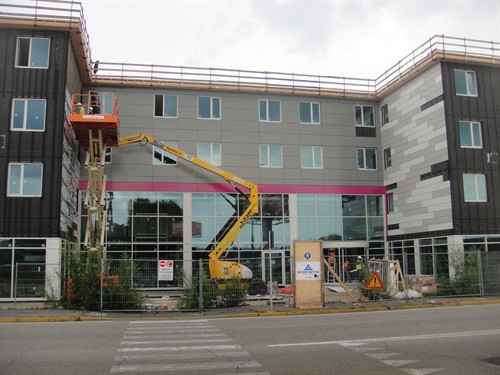