Last weekend I took the family to see my parents, who live in the quaint seaside resort of Dawlish in Devon, England. For the first time in decades we travelled by train, which, thanks to my very informed colleague Paul, did not cost us an arm and three legs. A quick comparison between hiring a car for three days and a cheap weekend break using a family rail card revealed that the train was probably the best bet in terms of time, convenience and cost. Tip for today: get a family rail card; cost £30; ticket price for four people without, £285; ticket price with, £170; net saving, over £80 - and I still have a rail card valid for 12 months (which both my wife and I can use).

Dawlish is famous for two things. Black swans and a railway line that passes within inches of the Atlantic Ocean. Some of you may recall that the line was washed away in the storms last winter, leaving tracks literally hanging in mid-air. It took several months to fix the sea-wall and tracks, but it all looks good and solid now (though works are still on-going). The day the line was reopened, Mr Cameron, our Prime Minister, visited Dawlish Warren (just a couple of miles from Dawlish itself) and made the usual speeches. In an effort to steal his thunder my father decided to walk along the new sea wall in Dawlish, slip and fall some 15 feet into the shallow water and stones below. Having taken a close look at the new stonework on the way down and wondered what a silly man he was for falling, amazingly he suffered only a few cuts and bruises. The incident attracted a passing doctor, the rail workers, their on-site medic, a substantial crowd and the air-ambulance that was on standby in Dawlish Warren for Mr Cameron.

We don't know how he managed to fall without breaking anything, but we are grateful to the fates. As we waited for the train back to London at Dawlish station, we got talking to the station attendant. When we told him that the air-ambulance was for my father, he turned to my father and said in his best Scottish accent, "Was that you? You silly bugger!"

Hopefully, both the new sea wall and my father will survive for many more years. Indeed my dad felt fit enough to play mini-golf and came second, but did not fancy the go-karts, in which I thrashed the competition (including my 17 year old son). Great weekend. 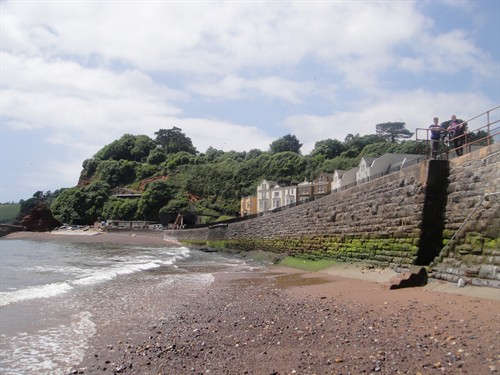