This morning I had reason to revisit Mayfair for site visits and a pop into the office. Unlike my previous visits during lockdown, the UK had recently let-up a bit and the feeling in London was one of returning normality, albeit of a peculiar fashion. It was a miserable grey, spitting day today. Good job I was armed with an umbrella and stout shoes.

My previously private limousine service, the #6 bus, was no longer private, and had not been for some weeks. Even prior to the let-up, the big red vehicles were becoming increasingly popular again. These days of course one has to wear a mask of some kind to protect fellow passengers on public transport, which was not required before. Made sense given the increasing number of folk travelling again. Although, it has to be said that not all folk were appropriately attired. Many were maskless. There is merit to being maskless though, as it does get hot under there and with every exhalation your glasses fog up, making reading the morning Metro something of a stop-go activity.

Returning normalcy was all around. Edgware Road was no longer the busiest road, in Britain. The traffic was slower than even before C19, but this was no doubt due to the blue bollards that have narrowed the street to one lane instead of two in large chunks along its length. I wonder if these will become permanent features. It will mean much longer journey times by bus and car if retained. What they intend to with such reclaimed road space is unknown. For the moment, they lie empty. So, which is now the busiest road, in Britain? Oxford Street, of course. The lonely buses that sailed east-west across barren waters are now accompanied by the usual coterie of cars, taxis and above all, people. People are returning to the shopping emporia and ignoring all social distancing. I took my daughter there last weekend, to meet a friend and go window shopping, and the street was back to busy, busy.

I had been to the office before today, a couple of weeks ago, when the let-up was just released. I popped in to print a big document and was out again in under 10 minutes. The day was warm and sunny, and Bond Street was full of people. As the shops had just reopened, the fashionistas were out making up for lost shopping time. Louis Vuitton in particular was roaring with trade (despite a lone chap standing on the opposite pavement yelling abuse at both the Asian shoppers and the local staff over a megaphone - ahh, free speech!). Today, Bond Street was much quieter. Perhaps it was the rain. Or maybe the fashionistas have filled their boots with Bond Street goodies. Either way, social distancing was much easier this time around.

I walked around Grosvenor Square to catch up on its hotel projects. The new The Biltmore, an LXR Hotel (a Hilton brand), by Millennium & Copthorne Hotels (I love snappy branding - something I had to talk about last week as a speaker on HS Property Hubs' "How Much is My Hotel Worth NOW") looks good to open after a facelift. The old US Embassy site, however, is no mere facelift. The building has been eviscerated and flayed. Talk about façade retention. If this were formally a living person, all that now remains are a few dried up fingernails. Only the external lattice remains. Was this truly the only part to have been listed? I hope the final product does not result in facadism. Oh, and hey! Where has the backward facing eagle got to? 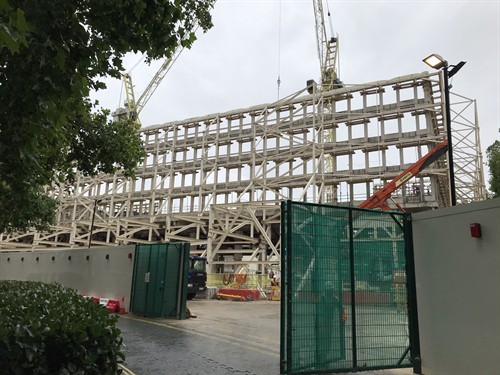 Before heading to my next meeting, I sheltered under a large tree on a bench in the Square's gardens and watched the world pass by, in the rain, for 10 minutes. Amazing how life perseveres and carries on. People were pursuing their daily lives, like nothing wrong in the world: walking dogs, fitness training, kickboxing, taking ciggie breaks, reading a book and canoodling.

Back on the streets of Mayfair, one of the buildings I inspected was close to Claridges. After more than a year, this great institution was still digging underneath itself. Have they reached the Earth's core yet? Are they in search of a sustainable heat source perhaps? Will mere mortals get to see the results of such expense? I will let you know if one does. Nearby, the ultimate wine shop, in Britain, was open for trade again and decorated in an NHS friendly rainbow made of corks. Nice touch, guys.

We inspected two more buildings and glanced at two buildings we had considered before, and we will look still. With luck, post-C19 there will be more opportunities to look at, until we find the perfect site. After a soggy walk back to Park Lane and the red limousine home, it was good to see more life and activity in the heart of London. Shops have re-opened, some offices have people in them (though still very few), some cafés are serving patrons, and the number of cars parked and circulating has made jay-walking a dangerous pastime once again (although walking on pavements is not much safer these days either, what with more bikes and electric scooters zooming about the place, on and off-road). Still good to see flow returning to the streets of this great city. Take care out there.