Compared to last week's trip to Gatwick, this week's Gatwick jaunt was much more relaxed (it helps when you use the right boarding pass). Although this was MIPIM week in Cannes, the purpose of my trip to the Côte d'Azur was not to wander around Cannes in a suit and attend nightly drinking sessions. The purpose of my trip to Nice was unadulterated business.

We landed at Nice Airport on time and made our way to passport control where the other side of over-regulated France was about to raise its equally disturbing head. As often commented on in my blogs, France has to be one of the most regulated countries in the world, with not only the largest labour code in the world, but also a requirement to surround all swimming pools with walls to prevent persons from falling in. The flip side at Nice Airport was a clear breach of basic Health & Safety resulting from a failure to implement crowd control procedures and escalator management. The passport control booths are on a level lower than the arrivals corridors and there is an escalator to carry passengers down the level. The passport control waiting area is small and several flights must have arrived simultaneously as the tiny waiting space filled rapidly behind us, and more people kept arriving with the escalator continuing, uncontrolled, to spill more passengers into the area. There were no staff in sight to manage the flow or the escalator, and the resulting melée grew more tightly packed by the minute - not helped by the fact that only two passport officers were on duty creating the bottle neck in the first place. I don't know how this growing sardine-can situation ended, but it could have become very ugly. Hopefully, one of the passengers had the common sense to turn the escalator off in the absence of any useful officials on site.

Given the team involved in our purpose of visit, we hired a people carrier and drove along the Côte visiting key hotels of interest. Being a Monday, the day before MIPIM, we managed to get into a few of Cannes's five-star hotels as part of the tour. It had been a while since I had visited these famous properties and it is surprising how tired they look and feel. What must the Cannes Film Festival celebs make of it all? This being the onset of the new calendar year for the Côte, the beaches in both Cannes and Nice were in full restoration mode, with trucks delivering rubble to Nice and sand to Cannes, and diggers sculpting these mountains of aggregate into desirable beach frontage. Hopefully, they will complete these man-made beaches before the innocent, high-paying tourists arrive in anticipation of these famous pristine sun bathing habitats. 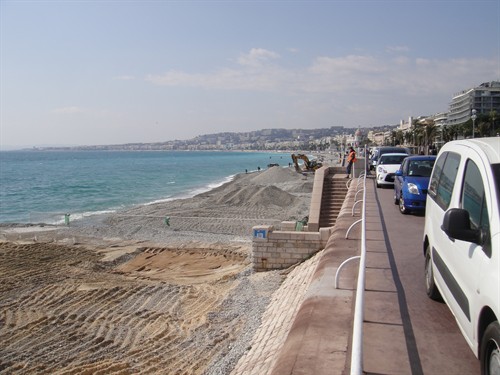 Our hotel for this séjours was a classic four-star waterfront property on the Promenade des Anglais in Nice. In fact, it was a hotel that some 10 years ago I had tried to buy with some investors. The property had changed a little since then, whereby the ornate façade was beautifully restored and the ground floor was in the throws of refurbishment. Hopefully, the bedrooms are next on the capex list, as they remain dated and tired and in the same condition as my earlier visits in the early Noughties.

Not normally a person who comments overly on the weather, on this occasion it is worth mentioning that the Monday was warm and sunny, with blue skies and the odd lazy cloud - perfect South of France weather in early spring. Tuesday in Nice was crystal clear blue skies and warm sunshine. In Cannes, where we had a meeting on the MIPIM fringe, the infamous Mistral was blowing through and whipping up a very stiff breeze for the MIPIM-suits. On Wednesday the heavens opened and the Côte was instantly transformed into the English seaside. We stayed in Nice the whole day, so I did not see how the 25,000 MIPIM-ites coped with the Mistral and torrential rain, but it must have been fun to see.

I met a couple of unforgettable characters on the trip: Vlad the Impaler (a lawyer from Paris) and surely the coolest Deputy Mayor in France (dressed in sneakers, orange socks and a cool grey pullover - who needs suits?). There were also a couple of lessons learnt from other persons' experiences. Firstly, if you don't use your BA outbound, the return will be cancelled automatically, requiring you to book a new flight in the departure hall when you pitch up for check-in and realise the flight you had is no longer valid. Lesson two, if you report your passport lost in 2009, don't try to use it again on arrival at Gatwick in 2016, as the efficient UK Border Control bods will pull you aside for 20 minutes, ask you awkward questions and confiscate said lost travel document.

And so, another trip to the Côte d'Azur comes to a damp conclusion. I hope the MIPIM-ites had fun and did business despite the awful weather, and I hope our purpose of visit closes with a sunnier aspect.