I was supposed to visit Tripoli a couple of weeks ago, but my friends on the ground advised I should delay due to fighting at the time. I finally made it this week to meet with our client and present to the board and banks in respect of our final report. The flight via Rome was good value for money and on time (there and back) - well done again Alitalia. I was met at the airport by a friend who drove me to my hotel, as taking a taxi is still inadvisable. The streets were busy, but not as busy as my last visit in April 2013 (is the population shrinking or are people afraid to spend time outdoors?) and the driving still chaotic.

I was lucky enough to meet up with lots of friends on this trip and had a lovely meal in a really cool restaurant to the west of the city centre (near Janzour). Amazing how life goes on even in such difficult circumstances. Our host advised that we should head home around nine o'clock, just to be sure.

Throughout my four days I saw plenty of police keeping an eye on everyday life and providing a reassuring presence. The few checkpoints appeared to be manned by genuine military. No signs of any militia and apart from a brief firework display last night outside my bedroom, no disturbing noises.

From a hotel market perspective, prices are still high and the smaller unbranded hotels appear to be performing strongly. Many were fully booked for this week. The most advanced new projects are still struggling to open. In April, the Four Points by Sheraton was hoping to open before Ramadan - it is still closed. Small scale works to the lower levels of the JW Marriott appear to be underway (surrounded by scaffolding), but no one knows if it will open in early or late 2014. Although I did not get a chance to visit the site, I understand that work on the Hyatt to the east of the centre is to restart soon. Work on the InterContinental should recommence in early 2014, now that we have presented and finalised our report.

My feeling after four days is that Tripoli is in a state of suspended animation and public services are running at a slow pace (the piles of roadside rubbish seem bigger than eight months ago and facades dirtier). There is very little commercial or construction activity. There are many plans and aspirations (including new housing, hospitals, schools, university buildings, parks, retail malls, etc), but the decision making processes remain slow and public funds low due to the disrupted oil sector. It is a fabulous city and a beautiful country still waiting for the opportunity to realise their incredible potential. 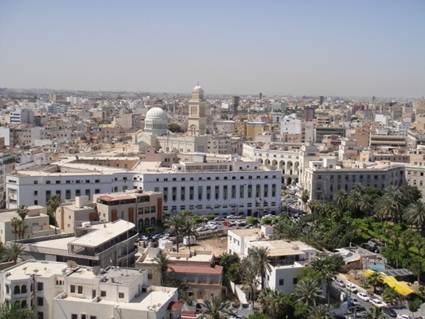