The original Season first evolved in the 17th century when the British gentry had their primary homes in the country and their secondary residence in London (very Jane Austen). The Season began in January and ran until June, and saw the social elite attend exclusive public events in the capital, host parties at town mansions and network with the sitting Parliament.

Today, the Season for well-spoken persons (ie those who pronounce "issue" with an 's' instead of a 'sh') starts in March/April with the Boat Race and ends with Wimbledon in July. This year I was lucky enough to receive invitations to a couple of the Season's events, Queens and Henley.

At Queens, I was invited to lunch on the Friday by a friend and we were served in the Members' Enclosure by my very own son (employed as a casual caterer in an effort to earn a few pennies for his trip to Barcelona). After lunch I managed to catch glimpses of the last few games of Murray winning his quarter final against Kyle Edmund (RSA) through a wall of well-spoken persons on the balcony of the iconic Clubhouse.

I have been to Queens a few times over the years, but this was my first visit to Henley Royal Regatta. After a morning of trying to make sense of French hotel values, I was looking forward to a less brain-taxing, simple afternoon by the Thames. However, my journey to Henley was less than simple. Having bought a ticket to Henley using a machine, I asked the Paddington Information person which would be the first train. He pointed to the board and advised the next train to Radley from Platform 13 (not a propitious number for an infrequent train user like myself, and so it transpired), with a need to change at Twyford for the Henley spur. I boarded the train to Radley and busied myself with emails. After a couple of stops the driver's announcements started to sink in. He kept saying the train was heading to Oxford. What happened to Radley? Had I boarded the wrong train? In this people-less age, of course there was no guard on board to ask and there happened to be no other passengers in my carriage (well-spoken or otherwise), so I took the rash decision to alight at the next station and ask for guidance.

I alighted in Iver, possibly the only station in Britain without a station, and could not find anyone for guidance. In fact, there were no buildings for anyone to be in anyway, aside from a couple of shacks on the platforms for commuters to shelter from the elements. I was truly in the middle of nowhere. In the end I waited for the next train to stop, some 20 minutes later, and asked the driver if he was going to Twyford. He looked at me as if I had landed from Mars and said of course he was. Where else would this train go on this line? Not to Radley obviously! We live in an age when we can put Major Tim into orbit for six months and bring him home safely again, but British Rail can't get the destination of a train right! No wonder the UK is something of a laughing stock at the moment, what with Brexit, the Iceland Incident and the Brexecution of BoJo.

I finally made it to Henley station and based on Google Maps determined a taxi was the quickest way to Remenham Farm, where my host had pitched his tent. £25 and 10 minutes later I was dropped off in the middle of a field surrounded by campsites, parked cars and helicopters, and hospitality tents. It took me a further 30 minutes to find my host and his food laden tent. Walking up and down the towpath beside the Thames, despite the awful weather, it was clear that the English love their Season events. There were well-spoken persons everywhere. Both sides of the river were lined with cheek-by-jowl hospitality tents, including some really cool bars and even a nightclub. My host was pitched close to the Redgrave Tavern (as in Sir Steve Redgrave, super-star British rower and winner of five consecutive Olympic gold medals). 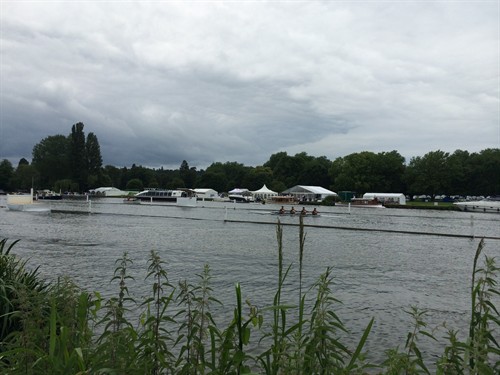 After some nibbles (great job again by the way, Janice), a draft or two of prosecco and some good conversation, it was time to depart. No longer the Henley Virgin I was on arrival, I decided the railway station would not be far to walk and I was certainly not in the mood to pay another £25 for a short ride by taxi. At 17.30 or so, pretty much the end of that day's event, the banks of the Thames were chock-a-block full of well-dressed well-spoken persons and navigation through the stripy blazers and colourful dresses was challenging (the towpath is not wide and the rowing community is made up of some very large chaps who tower above the masses and at two abreast block the entire width of the path). I am sure there is a purpose to the price tags that many people had hanging from their jackets, but it did look as though, if the mood took you, one could purchase one of these row-brutes to take home as a souvenir or simply to plough a path for yourself through the throngs on the river bank.

The walk to Henley station was quick and curious. Moving in the opposite direction through the town and over the river were waves of well-spoken persons in eclectic Mad Hatter style attire. I waited patiently, shoulder-to-shoulder with hundreds of well-spoken persons, on the one-and-only Henley spur platform (only one train in and out at a time, a little like Windsor - why is it that the favourite out-of-London haunts of the well-spoken crowd are all at the end of their own dedicated spurs?) and where were all these people when I needed them in Iver?

And so another Season drew to a close and despite the appallingly poor summer weather all events concluded successfully, which is at least something reassuring and calming after the recent rollercoaster of results. In a matter of one week, we went from the low of Brexit, to the high of the Australia Whitewash, to the low of the Iceland Incident (aka Brexit II), to the high of the minnows Wales beating the second best team in world football (Belgium), to the low of our politicians' unseemly shenanigans in Westminster. What a week in British history! And what would Jane Austen have made of it all? An unbelievable new novel probably.