Nearly three years to the day I was back on RMS St Helena, only this time not in the South Atlantic. The RMS was in London this week for its farewell tour and one final promotional event. 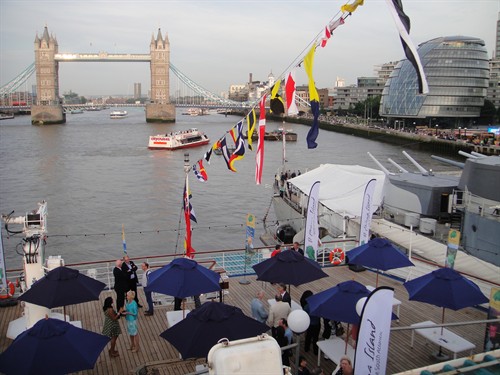 In the summer of 2013, I became one of the privileged few to sail to the remote island of St Helena in the South Atlantic. The one-and-only scheduled boat service to the island has been provided by the venerable RMS St Helena since its launch in 1989, purpose-built in Aberdeen as one of very few cargo-combi-liners (carrying both cargo and passengers). For the really curious, RMS (Royal Mail Ship) is a designation dating back to 1840 and a prefix only used by seagoing vessels under contract to British Royal Mail. One of the most famous RMS ships ever was the RMS Titanic, of iceberg fame. Today, there are only four RMS still in service and soon to be only three when RMS St Helena retires later this year - the other three being: RMS Segwun (Ontario), RMV Scillonian III (Isles of Scilly) and RMS Queen Mary 2.

RMS St Helena was vital to St Helena's survival as a populated island. All items not grown on island had to arrive by RMS, including, but not limited to: cement, cars, pushchairs, flour, potatoes, toilet rolls and government advisers (such as yours truly). And until recently anything larger than a small white van could not even get off the dock, as all arriving items had to pass through a listed archway in the defensive seawall, designed for horse and carts and not for large articles such as trucks or bulky machinery essential to modern life. Just as an example of how vital the RMS is to St Helena, in early 2013 (a few months prior to my trip) someone forgot to order the potatoes and the RMS arrived minus tubers resulting in a potato famine on-island until the RMS's next visit some seven weeks later, at which point the potatoes sold out in a day as Saints sought to make up for lost chip consumption.

Today, the island is about to experience a sea change. A new jetty at Rupert's Bay will permit the docking of cargo ships and the lack of a seawall will allow any sized item clear entry to the island's hinterland. And most momentously, St Helena Airport will bring the world to one of the world's most difficult to get to destinations. The new airport has had a few hiccups and is opening later than expected, but when it finally comes on line later this year the Saint diaspora and international tourists will be able to visit at the drop of an airline ticket. When I sailed to the island in 2013, it took me 22 days to get there and back to London, of which I spent only six days on the island itself. By comparison, flights from London or South Africa will only take 10 or 4.5 hours respectively, which is decisively quicker than five days sail from Cape Town.

Having spent 10 days on RMS St Helena sailing from/to Cape Town, I got to know the ship pretty well. So the chance to revisit this amazing ship again was an opportunity I could not ignore. For the special promotional event in London, the RMS was moored up against HMS Belfast on the Thames in the centre of the city. From the office, I took two tubes to Tower Hill, walked around the Tower of London (one of four World Heritage Sites in the capital) and down to Tower Millennium Peer. At the peer, I was instantly picked out from the milling crowd of tourists as a guest of the RMS (must have been the suit).The lovely lady walked me down the ramp to the pontoon where my passport was verified and my bag scanned by a burly secretive type. The tender from the pontoon had to cross the Thames, which was quite the experience in itself. The Thames is a major highway and at rush hour it is full of jostling waterbuses, party-boats, tugs, cargo barges, commercial vessels, tourist ribs, police launches and the odd Duck Tour. As if this constant traffic is not enough for a pilot to contend with, the Thames is also tidal creating significant cross-currents and wave activity. Our tender managed to dodge the river traffic and carefully negotiated the choppy waters to bring us alongside HMS Belfast, where we disembarked and climbed the decks to a gangway linking the HMS to the RMS.

On board the RMS, memories came flooding back of those 10 days at sea. On the rear sundeck, I bumped into old acquaintances and met new ones. I heard the bombshell that the air service to St Helena is further delayed as the chosen carrier decided to pull out due to their discomfort with the high winds on island. One of the ship's two captains offered to take a group of us for a detailed tour of the ship, including some of the back of house areas I never saw as a passenger. What an incredible lady she is - so flexible and so fit for purpose. It will be sad to see RMS St Helena sold off for who knows what second life. 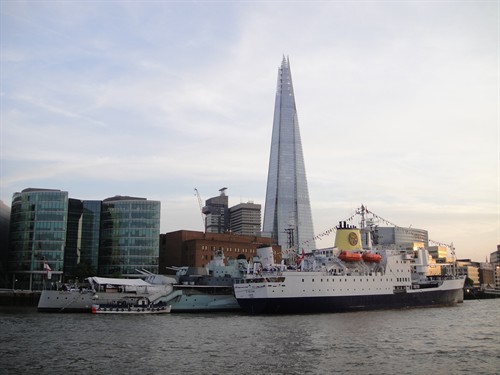 For some reason, the return journey to Tower Millennium Pier was a lot less hectic, with fewer boats (well past rush hour by this time) to compete with and calmer waters. After a last longing look of complete admiration for the old girl, I headed back around the Tower to the tube and home. RMS St Helena is a highly memorable part of my life, but she is a huge and material part of the lives of Saints on St Helena. After her last promotional event in London, the RMS was due to sail down river and load up with cargo and passengers at Tilbury Docks before heading out into the world's oceans again to return to her eponymous raison d'être. It will have been one of the longest periods for the islanders without an RMS visit, as the RMS will take another 15 days to reach St Helena from London, an absence of over five weeks. I hope someone remembered to order the potatoes this time.