My day trip to Lisbon started at the silly hour of 03.00 when my alarm clock beeped. The taxi arrived at the silly hour of 03.40 and I arrived at Heathrow T2 at 04.20. The hour was so silly that the security barriers had not even opened yet and I had to join a snaking queue in the check-in hall. After another successful security pass, at 04.45 I was the 22nd customer of the day at Eat, the only outlet open at silly o'clock for a quick coffee. The gate was announced at 05.20 cutting things very fine given the flight was due to leave at 06.00, especially given the silly time of 15 minutes to walk to the B Gates under the full length of the terminal and the apron above.

Thanks to the French (again), we were delayed 45 minutes on take-off and landed in Lisbon an hour late. The outbound TAP aircraft offered less leg room than a sardine can for a giraffe (EasyJet is positively first class by comparison), but my crushed kneecaps were saved by the low passenger count (40 pax only) allowing me to sit sideways across my row. There was little to see from my window seat as an endless white blanket shielded the ground until Galicia. Below the cloud cover, I later learned that the rain in France was so severe that the tumescent Seine had forced the closure of the Louvre, the Musée d'Orsay and the Paris Metro. The weather this week had been so bad that even Roland Garros on the second Monday saw no play for the first time in 16 years.

In the luggage hall of Lisbon Airport's Terminal 1, I noticed the "Lost & Found" office. In most airports, the Lost & Found is a simple counter near the carousels. Not so in Lisbon T1. Lisbon T1 is a full blown walk-in office space, with sofas, chairs, TV, water-cooler, multiple desks and full of staff. The queue back out into the luggage area must have been 20 people long. Further proof positive that TAP and Lisbon still have major luggage issues (reference Phil's Travels - Lisbon, Portugal (05.16)). 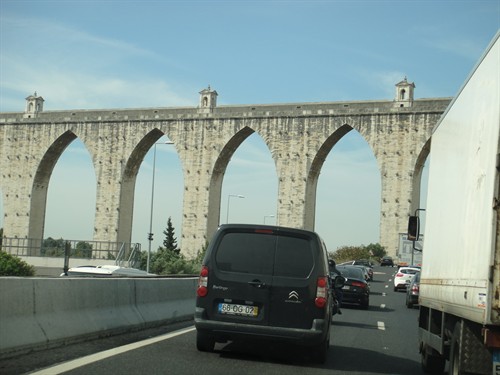 In Lisbon, a quick taxi ride whisked me under the elegant span of the Aguas Livres Aqueduct  (photo above) to my meetings in a palace turned hotel. We interrupted our meetings with a quick business lunch of fresh sea bass and salad in a stunning salon, finished off with a delicious mini nata or three. A popular prandial topic was Portuguese heroes, inspired by that night's England v Portugal friendly at Wembley. These included Amerigo Vespucci (after whom, little known to Americans, America was named), Vasco da Gama, Eusebio (although he was actually from Mozambique) and of course the imperious Ronaldo, who naturally scored the winning penalty on Saturday night in the Champions League Final. At Wembley he was absent through injury (a safety measure for sure ahead of the Euros in a week's time) and I understand the game was a turgid affair with the highlight being a Cantona-style karate kick by Bruno Alves on Harry Kane.

Speaking of the Champions League Final, a quick thought: the channel with the broadcasting rights in the UK was BT Sport and the regulations state that the final was to be shown free of charge. BT announced Sky 433 would be one of those free-view channels. When I checked Sky 433 the match was not showing, making my recording of the game a complete waste of effort. Thus, 20 minutes into the match I had to scramble with a laptop to find a BT free feed. The scramble succeeded, but the feed had a 30-second delay. How do I know this? Through my open window I could hear my neighbours cheering a full 30 seconds before I saw the event on my laptop, somewhat destroying the tensive enjoyment of watching live football. Needless to say, as a result of such big-company behaviour my intense dislike of BT remains firmly unchanged. The match? Blue collar Athletico Madrid just lost on penalties to the white collar royalty of Real Madrid. Good to see Zizou is performing equally well as a manager as he did as a phenomenal player. At least there is one Frenchman in this world with a strong work ethic.

After a quick beer in the sun post meeting, I flew from Lisbon T1 (infinitely better than T2) back to Heathrow on a TAP plane with leg room. I landed at the silly time of 22.45, queued indefinitely at passport control, caught the slow and silly Heathrow Connect, walked home from Paddington and was tucked up in bed some silly 21 hours after waking up.

[Note: this blog was written on the sad day that The Greatest  died, one of my biggest icons of all time and a giant I was privileged to meet and host twice during my hotel-keeping career. RIP Muhammad Ali (née Cassius Marcellus Clay, Jr), 'The Transcendent One'.]