I had the unusual pleasure of walking to Paddington under an unusually clear and sunny sky (the English summer has been appalling this year), and of traveling on the Heathrow Express with my lovely wife, who was en route to meetings in Zurich. Such pleasure was swiftly wiped from my mind when I decided to assist the Zurich-meeting-attendee with her luggage to the check-in desk in the least desirable terminal in the UK, T2. The walk to T2 underground is long and boring, the lifts are slow and boring, and the terminal is just, well, boring! As soon as my lovely wife went through security I ran for the Express and the gloriousness of T5.

On the plane to St Petersburg I read that Boeing is celebrating its 100th anniversary this year at the biennial Farnborough International Airshow and that England is not celebrating 50 years since they won the World Cup (no surprise there after the Iceland Incident). The view during our descent into St Petersburg should have given me a clue that all was not well with the weather in northwest Russia. The cloud cover was so thick and grey that we did not see the ground until a few feet from the tarmac. During the descent I thought I saw a flash of light in the grey just ahead of where I was sitting. I was not sure, but other passengers later told me that we had been hit by lightning. Thank goodness our BA aircraft was made of sturdy stuff, and a very happy and justified birthday to Boeing was very much the order of the day.

In St Petersburg International Airport, even though the lighting has improved since my last visit and the guards do smile, Russian passport control still has those mirrors up and behind the arrivee's head. Why? With all the technology available today, what is the point of such an archaic measure? Perhaps it's a nostalgia thing.

From the airport, we were whisked through torrential rain to our hotel in a chauffeur-driven Merc (black, naturally). After a weekend of 31° and glorious sunshine, the next few days in St Petersburg were forecast to be rain, wind and cool temperatures. They weren't kidding. It was monsoon weather, with horizontal rain and constant gloom. So much for the famous White Nights. More like Grey Penumbra. 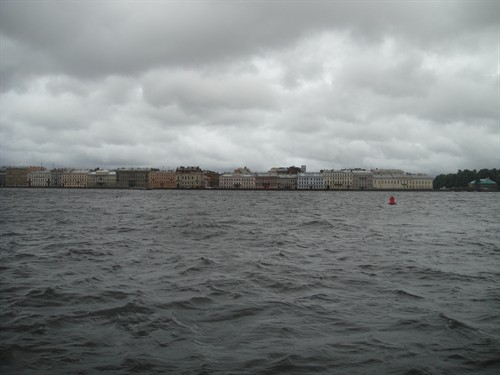 During my time away: the instigator of Brexit (Nigel Farage) emulated his greatest fan (BoJo) and resigned; and the new blaring host of Top Gear (Chris Evans) stepped down after poor viewing figures, leaving the floor to Joey from Friends (famous for not sharing his food and now, evidently, no longer sharing his cars).

The WIFI in my hotel room was weaker than the sunlight outside and a little digging around revealed that a previous guest had pilfered the power cable to the router lying under the desk. The organiser of the conference I was attending quickly arranged for a replacement cable and tie, as I was considered underdressed for such an august event.

The host hotel had clearly taken a few creative pills and went into overdrive for the coffee breaks and dinners. Themes included:

The morning of my departure back to London I had planned to walk to the Hermitage and soak up the St Petersburg architecture along Nevsky Prospekt. However, the weather was still so awful that I thought better of soaking up the torrential rain and sitting on the plane in sticky wet shoes and jeans. The return journey was trouble free and many congratulations are due to the organisers and hosts for an incredible conference. Hopefully they will also be able to fix the weather too for the next one.