Without knowing it in advance, our overnight visit to Lichtenstein coincided with a Blue Moon (aka an intercalary month), which seemed most fitting given Lichtenstein is such a rarely visited destination. Getting there was straightforward if a little time consuming. We caught a train from Zurich Hauptbahnhof (always on time thanks to those wonderful Swiss clocks with the blobby red second hands) and rode along the shores of Zurichsee to Sargans, where we changed onto a bus to Vaduz, the capital of Lichtenstein.

Lichtenstein is a country in two parts: (1) the flat linear part where everyone lives and works along a single main road (Landestrasse) that runs north-south close to the River Rhine; and (2) the mountainous bulge of a hinterland where people ski and spend time with glorious unspoilt nature. Vaduz lies in the centre of Part 1 and comes in three parts: (a) Landestrasse and the built-up areas to the shore of the Rhine; (b) the pedestrian street where all the key buildings (museums, town hall, tourist office, restaurants, shops, bars and parliament) are located; and (c) the hillside to the east, home to huge houses and Vaduz Castle (seat of Prince Hans-Adam II, the head of state).

Someone in the know told me that Lichtenstein is Switzerland's Monaco. So on arrival in Vaduz I was expecting every second car to be a Ferrari. In fact, there were none. The cars were very modest and the city equally so. I suspect most Lichtensteiners are not so wealthy, or at least not as flashy, as the expats that overwhelm the Principality of Monaco. That said, a local farmer did deliver a piece of farm equipment to his field using a brand new Range Rover Sport - a genuine Lichtenstein tractor rather than a trendy Chelsea tractor.

Our hotel was close to perfection, including plugs that actually work in the sink. Why is it in this age of sustainability and resource conservation that most hotel plugs don't actually plug, resulting in a huge loss of water? Rather than spend millions on PV, CHP and other high tech solutions, surely hoteliers could address the cheap basics first. The hotel gardens were tended by a robo-mower and the restaurant had a treetop terrace that was stunning in its simplicity and technology. The food, under the stars, was delicious (including the world's most expensive jelly-and-ice-cream), but the Prince's wine even more so. My only irritation was power - as in most hotels, you had to keep the lights on to charge your phone. Why? Let's save some carbon and do the basics right.

We had a gorgeous garden junior suite with direct access to the immaculate lawn and terrace, provided you did not break a leg on the wandering robo-mower, and panoramic views of the valley and Vaduz Castle. I am convinced that robo-mowers are Switzerland's hidden secret to perfect mountain pastures. Despite the garden access and multiple risings in the night, I never did manage to catch sight of that elusive Blue Moon. Between the mountains and gathering rain clouds, the moon remained firmly out of sight, such rarity indeed befitting of a Blue Moon. 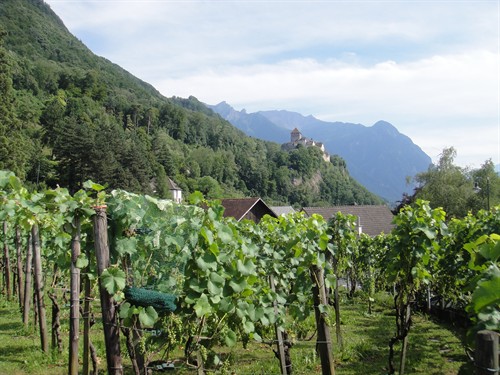 Next morning, whilst my lovely wife enjoyed a genuine non-fruit related massage treatment (see Zurich 07.15), I walked in the rain up to Vaduz Castle. Although there is no public access, I was not alone for long. A long line of Chinese tourists arrived under a panoply of colourful umbrellas. Where Zurich was notable for its Middle Eastern visitors, Lichtenstein is notable for its coaches full of Chinese, presumably in search of genuine Swiss watches in the shops that line Part 1.b above (where one could not move to Chinese watch gazers).

Being the adventurer that I am (who else would chose Lichtenstein as a romantic weekend for two?), I walked the whole 500 yards from downtown Vaduz to the Rhine for a quick gander. I had expected the Rhine of renown, with turgid waters and heavy shipping. Instead, this high up river the Rhine was narrow and shallow and could barely support a canoe. That said, the massive flood walls did suggest this was not an entirely constant state for the river. Only the Swiss (and Lichtensteiners) could build such beautiful and reliable flood defences. So much so, Lichtenstein's national stadium is right next to the river wall.

Lichtenstein is surely the only place on the planet cleaner that Switzerland (also no pigeons), its currency is the Swiss Franc and its seven football clubs play in the Swiss league. As such, I was amazed to hear that 70% of guests to our hotel are from the UK (including businessmen midweek and leisure guests at weekends). So much for my adventurous endeavours. That said, I am sure such UK guests are not drawn by the hotel's Eggs Benedict, which scored a measly 1/10 on the Benedict Scale, which did not seem quite right for such a near perfect venue.