It was that time of year again, when our family spends the hottest two weeks of the year on the wonderful island of Cyprus. We have been travelling to Aphrodite's isle for the same two weeks and staying in the same hotel for 4-5 nights for 13 years straight. One might say we are besotted with the island of love (or at least my kids are).

Our departure from LHR coincided with the mother of all summer storms, heavy rain, thunder and lightning all conspired to delay our departure by over an hour. This enabled us to give Wagamama another go for breakfast. Our last visit was dire. This visit was direr. Not only was the service excruciatingly slow, but the "crispy" bacon was distinctly un-crispy (difficult to develop a crisp when bacon is virtually raw), and I had to eat same undercooked bacon and pancakes cold as it took so long for the maple syrup to arrive. The only good thing to come out of that breakfast was confirmation that my son's A Level results (published earlier that morning) were good enough for his first choice university. Many congratulations, bud, and Nottingham here we come!

We landed in Cyprus later the same day and headed straight to Nicosia on the airport bus. Waiting for us on arrival were our kids and other family, but also my favourite meal of the year - my first Pikis kebab - which more than made up for the lousy breakfast.

The following morning we were greeted by the familiar and comforting sights and sounds of Cyprus - glorious sunshine and the cicada day-long chorus.

Driving around Nicosia it is evident that there are many more empty shops compared to last year, except in the old town, which is incredibly vibrant and fun. Amazing that in the good years this historic and picturesque centre was largely ignored, and now in times of hardship the locals are rediscovering their greatest asset.

The only real evidence of wealth in Nicosia at the moment is to be seen where Cyprus's "Masters of the Universe" ply their trade. In the UK, these Masters  were traditionally the investment bankers. In Cyprus, they are the accounting firms. They continue to defy the crumbling buildings that surround them and occupy the most lavish towers - now including the most expensive and ostentatious 'tour' in the heart of the city, designed by starchitect Jean Nouvel. Those that have in Nicosia, really do have (including the archbishop who is rumoured to have built a pool on the roof of the historic Archbishop's Palace).

During our stay, my lovely mother-in-law cornered me in the kitchen one evening and asked me why I was so anti-halloumi. Initially I had no idea what she was on about. Being in Cyprus and on holiday, I rarely get to see any news that I can understand (being presented in Greek). It turns out the humble halloumi is under attack from UK cheese. Cyprus is close to securing appellation status for its heritage product and UK cheese feels it will lose valuable revenues if it can no longer produce this cheesy-teeth-squeaker in the UK. Surely with over 700 different cheeses produced in the UK, the loss of a little haloumi is not such a big deal - especially when little Cyprus needs every economic boost it can get.

This trip, both my lovely wife and son ventured into the old town to experience the Hamam  Omerye.  This jewel dates back to 1571 when the island fell to the Ottomans and was built as a donation to the city by Lal Mustafa Pasha, and named after Caliph Omar. It is so good that Haman Omerye received the Europe Nostra prize for Conservation of Architectural Heritage. Although I don't partake of such treatments, hamams do have a reputation for being silent healers. Hippocrates believed such artificial fever offers the best protection for health. In hindsight, perhaps I should have gone too, to see if it would heal my tennis elbow. 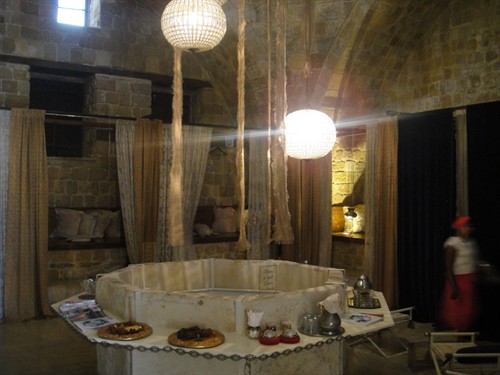 One piece of news I did pick up whilst away, was that Cyprus is among the five safest countries in the world (according to Value Penguin). It is true that, apart from the kamikaze drivers, the country feels extremely safe and is very pleasant to walk around.  We left Nicosia and spent a few days at our favourite hotel in Paphos, where the usual Russian brigade had downsized and the pools were instead infiltrated by a large numbers of families from over the water in Israel. It is interesting to note that whilst Greece and Italy are being overwhelmed by the immigrant crises from North Africa and the Middle East, Cyprus, the 5th safest place on Earth, receives very few. After some 13 years in the same hotel, I think my lovely wife is finally getting to grips with the celestial movements of the sun and may soon graduate in Umbrellology (the science of moving umbrellas and sunbeds to create optimal shade or exposure).

On departure the absence of the Flying Mouflon at Larnaca Airport was a poignant reminder of the island's recent economic crisis (Cyprus Airways finally went bust and closed down in January 2015, after decades of mismanagement and government interference). We left London in a storm and flew back in a storm. Our return flight being at night, we could at least admire the powerful electrical storms in the clouds below us over the Channel, scary but spectacular. I just heard that August 2015 was the wettest since 1892. So much for global warming and based on this evidence I suspect we will be in Cyprus and our favourite hotel again for our 14th consecutive August in 2016.