For the last six weeks, the world's toughest lads have been beating six-bells out of each other in their struggle to win the diminutive Webb Ellis Trophy, otherwise known as the Rugby World Cup (the world's third largest sporting event, after the Olympics and Football World Cup).  For such big men, why do they have such a small trophy? It seems out of kilter with the more manly-sized FA or UEFA Cups for those more lady-like soccer players.

Last weekend we were fortunate enough to secure some tickets to the third-place play-off, between the rugby titans of South Africa and surprise package Argentina. The match was played at the all new Olympic Stadium, even newer than when it was new in 2012. For a stadium that was originally designed to be easily downsized and converted to a football stadium, the time and cost it has taken to convert must surely beg the question - was it worth it? £537m to build for 2012 taking 4 years, plus £272m to convert and a further 3 years = total cost £809m, nearly 13,500x more than the 1908 London Olympic Stadium in White City (costing a grand total of £60,000 in its day). Why not build the original for less knowing you are going to knock it down and start over anyway, or just design fit for conversion purposes from the start? Has it been a case of government indecision, or just poor original design? One of our guests was an architect and he could not figure it out.

Whatever the cause, the field of play seemed to be somewhat off-centre and we were on the fat side, set far back from the pitch. The distance from our stand to the pitch appeared to have been lengthened by huge voids dividing the lower and upper stands. Despite the lack of proximity to the pitch, the stadium feels open and offers clear lines of sight. However, the atmosphere generated within seems lacking, perhaps because of the huge spaces created by the voids or perhaps because it was a third-place play-off. Thus before I can give a full and final opinion I need to revisit for a final of something highly popular. All invitations will be considered. 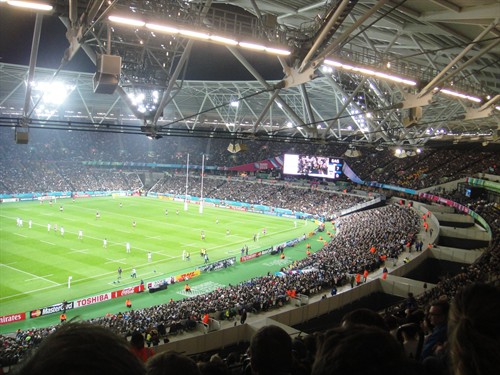 On this the weekend of the Day of the Dead  (a Mexican national holiday that was moved to coincide with Halloween), there was an uncanny number of coincidences relating to the subject: