When my lovely wife suggested we escape London for a long weekend whilst the kids are away, of course the first destination I could think of was Lichtenstein in summer. We travelled to T5 with our kids, as our flight was at the same time as theirs to Cyprus. My passage through security was the source of much merriment for my teenage son as I was stopped repeatedly for: beeping the metal detector; having to pass through a more detailed scanner (which revealed I have an alleged metallic right wrist that confused me and the official as I don't have any bionics and don't wear a watch); being told off by another official for being late to claim my scanned carry-on that he wanted to check (all because if my non-existent bionics and a clearly dodgy pair of scanners); and finally, having to empty my carry-on for a routine bomb check. It was my longest security experience in years. So much for Fast Track!

During breakfast we witnessed the impressive sight of Heathrow's runways opening for business, unleashing a frenzy of landings. At one point we counted a constant supply of 12 aircraft in the sky lined up to land between both runways. We nearly missed our flight as my lovely wife just had to satisfy her coffee addiction one more time with yet another hit for the plane (which she had to leave behind at the gate anyway) and my son had disappeared without taking his sister to their gate.

On board I was seated next to one of the world's largest men. He was so well proportioned that the armrest could not be lowered and I had to rest my arm on his midriff. Fortunately, the flight was quiet and we were able to move, leaving said gentleman's midriff free of my left arm.

The recognised route to Lichtenstein is via Zurich, so we spent a night in the city before and after our trip to Lichtenstein. Zurich is the largest city in Switzerland and offers a good range of sights to see over a couple of days. Most of the buildings are square and architecturally dull, but the old town districts are very pretty and historic. Local food appears to revolve around rostie, a Swiss-style pizza if you like, of which I consumed many varieties and such frequency may well have contributed to my "rostie rumble" inspired WC visits.

Despite its scale, Zurich is incredibly clean and the first thing I noticed was the absence of any pigeons (which was manner from heaven as I dislike the flying disease-riddled beasts). Even the Hauptbahnhof was devoid of the terrors. Were they expelled centuries ago by the Swiss authorities for being too dirty, or is it that faced with such cleanliness there is simply no way for a pigeon to scrape a living off the streets of Zurich? Either way, the lack of pigeon-life was more than made up for with wasp-life. Everywhere we went, we encountered wasps. The theory according to my lovely wife is that without pigeons to eat the wasps, wasps will become the dominant form of wildlife in any given city. Perhaps pigeons are not so bad after all.

Our first night in Zurich was very quiet. The streets were typically deserted by 19.00, which enables the Zurichsee swans to get an early and peaceful night's sleep. However, our second night coincided with the Swiss National Day and this must be the only day of the year when one can see Zürchers out after dark, having fun. They milled about, and lined the river and the lake to watch the endless firework displays. We celebrated by shadowing the Maybachs and McLarens into the Baur Au Lac Hotel for a quick cocktail, followed by a fondue in the old town and a stroll around the water's edge to soak up the atmosphere - how much more patriotic than that can you get? 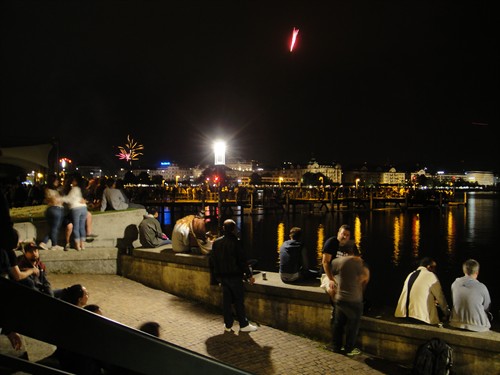 This major banking centre is clearly very popular with persons from the Middle East (both Arab and Jewish). Not only did we see them about town and on our flights, but the apartments opposite our hotel room gave us a good cross-sectional view of visitor types.

As a highly rated loyalty card member, our hotel sent my lovely wife a plate of dressed fruits, which the room service waiter called a "wonderful treatment". Not sure what he was suggesting, but the culinary highlight for her was definitely her fondue cherry. She loved it so much, we are going to St Moritz in London to relive the experience.