Our one-night trip to the land of the Vikings started very early on Saturday morning, my lovely wife's third pre-dawn start of the week. Looming like a something out of Tolkien's Mordor, our taxi drove past the black, encrusted remains of Grenfell Tower. Needless to say, few words were spoken in the car as this darkened relic no doubt still contained missing persons and expressed far more than words could ever say.

The purpose of our visit to Børkop was to celebrate the combined 95th birthday of our lovely daughter's best friend's parents. Our daughter had gone a few days before with her friend and her parents in an advance party to prepare for the weekend's festivities and to celebrate her best friend's actual birthday. In arriving a few days late, we missed a prison break, a fjord-explore adventure and a fancy-dress party (at which our daughter dressed as the newly popular Wonder Woman - shield, whip and all - and the birthday father appeared in character as the Viking god Thor).

After a straightforward trip via the BA First Class Lounge at T5 (thanks to my lovely wife's well-earned Gold Card), we landed at Copenhagen Airport and quickly realised that Denmark is not the streamlined nirvana that Bang & Olufsen would have us believe is everyday life in Denmark. For one thing, their airport has similar signage deficiencies to those in France and the ergonomic flow of people through the terminal was as far from B&O as a Viking is from a Vestal Virgin (whereby the crowds of arriving passengers clashed with the crowds of departing passengers and the ensuing friction raised the ire).

We hired a car and drove to Børkop, some two and half hours to the west. This gave us a chance to see some of Denmark's countryside, which, to be honest, has little to recommend it (or at least along the E20 highway anyway). The topography was flat and there were few natural landmarks to make the drive interesting. However, what Denmark lacks in natural scenery it more than makes up for with monumental bridges (such as Storebæltsbroen, an 18km long bridge, where at 254m in height the pylons are one of the highest points in Denmark). 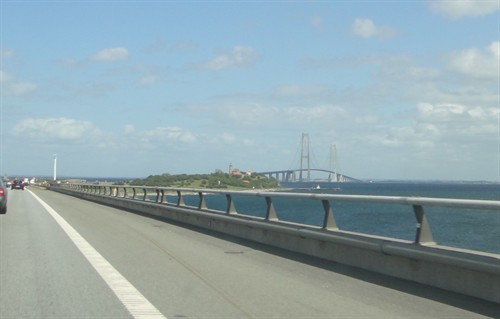 Danish motorway driving was very Vettel-on-Hamilton-in Baku like. They will dodge between lanes without indicating and squeeze into the narrowest of gaps between cars, and all at 150kph and in torrential rain (the Danish summer was no better than ours in London that week). Who knew the Danes could be so feisty? Perhaps Viking blood is still alive and well in this otherwise pacifist nation.

Certainly, the Viking bloodlust was not in evidence during the festivities. Our hosts were a wonderful and very generous family, and like all households they have their particular quirks. In this case, the father aspires to visit every single sovereign nation on Earth (currently at around 155 countries) and, according to him, the mother aspires to own every single shoe in the world (currently 200+ pairs and counting).

Although we missed the fancy dress party the night before, we did make it in time for the main event, a gorgeous dinner with delicious local foods, fine wines and a hall full of wonderful people. Throughout the dinner there were various forms of organised and unorganised entertainment, a flow of variously prepared, Powerpointed and improvised, hilarious speeches, and always followed by a toast or two and various combinations of long and short 'hooahs'. Net result? A good quantity of fine wine was consumed in such pleasant surroundings. The venue? A former lunatic asylum turned hotel overlooking a fjord - where else?

Børkop is around 10km north of a town called Middlefart (which caused much childish laughter in our car) and overlooks Vejle Fjord on the Jutland Peninsula. Aside from its asylum related heritage, Børkop did not seem to have many tourist attractions and even less of a commercial orientation. However, just 40km west lies Billund, the centre of the toy universe. Billund is the home of Lego (the most valuable toy brand in the world) and of the first Legoland. Unfortunately, we did not get time to visit this trip, but if I can brave Viking highway driving one more time I hope to go one day as one Lego's biggest fans.

Did you know:Lego's interlocking bricks idea was taken from an English innovation? Lego's founder, Ole Kirk Christiansen, a carpenter from Billund, copied the idea from Kiddicraft's Self-Locking Bricks, which had patented the idea in the UK in 1939 and released the toy in 1947. Lego first released their version in 1949 and called them Automatic Binding Bricks. I have to say, Lego sounds and looks much snazzier, and the rest, of course, is history.

We flew back to London with our fabulous hosts, with me carrying Wonder Woman's shield and birthday boy his Thor muscles. Given we had just spent a weekend in an asylum, skåling  left, right and centre, and had just survived the Viking dodgems on the E20, my walking through Copenhagen Airport carrying Wonder Woman's apparel did not phase me one bit. Skål to all and Man må hyle med de ulve man er i blandt.