Last Thursday evening I had Pimm's in a legal eagle's nest in the City (great views) and mojitos on the roof terrace of the Michelin Building. 'Twas the season to celebrate summer. The weather was hot and sticky, and the drinks free and flowing. After my summer party crawl about London, I left the Michelin Building (built in 1911 as the first permanent UK HQ and tyre depot for the Michelin Tyre Company, an art deco masterpiece by one of Michelin's employees, François Espinasse, decorated around its outside with tiled adverts of the time) and caught a #414 home.

Normally, the #414 bus heads up Park Lane and Edgware Road to home, but not that night. In Knightsbridge, the bus was forced to detour west to Ken High Street, up Church Road and east to Marble Arch - in effect a complete tour of Hyde Park and Kensington Gardens, which took some 40 minutes to complete. At Marble Arch at, by this time, pretty much the next day, for some reason, the traffic was congealed solid and I had to disembark and walk home in full business attire, humping a full work bag, in 30+°C and 100% humidity, and through all that exotic Edgware Road at midnight had to offer.

The following day, after my lovely daughter's graduation from junior school, we took a train and journeyed west to Dawlish. We arrived in time for dinner in the garden beneath a wonderful sunset and a well-earned early night. The following day we visited Exeter so I could see the Royal Clarence for myself.

The Royal Clarence was built in 1769 as the Assembly Rooms and became England's first 'hotel' in 1770 when its French manager, Pierre Berton, advertised the property as an "hôtel". By 1776, it was known as The Hotel and subsequent names included: The Cadogan, Thompsons Hotel and Phillips Hotel, and finally became the Royal Clarence in 1827. On 28 October 2016, this historic property and a cornerstone of Cathedral Yard fell victim to a conflagration in the adjoining art gallery and the ensuing inferno had left a smoking hole in this medieval streetscape. 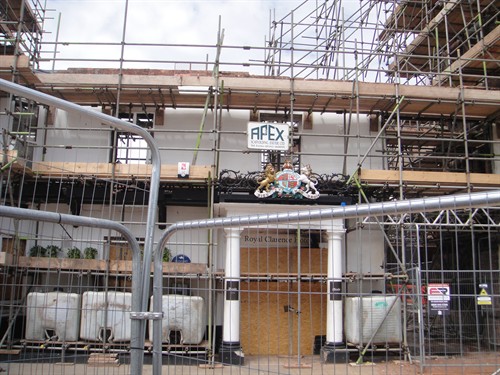 Since the fire, the remains have been stabilised and the hotel's owner has promised to rebuild the property faithfully and as close as possible to the original design. A laser survey of the old building (judiciously undertaken just a few months before the fire) should help with the restoration and the archaeological finds beneath the ashes should add a further touch of authenticity to this reincarnation of Exeter's valuable heritage.

We had lunch in the very nearby Ship, a 16th century pub, just a few feet the other side of Martins Lane from the Royal Clarence that it is a credit to the local fire brigade that this equally historic auberge was not destroyed as well. Ship is famous for being Sir Francis Drake's favourite watering hole, although myth busting Exeter Memories does not necessarily support the claim and believes that Sir Walter Raleigh may otherwise have been a more frequent drinker having been born in nearby Budleigh Salterton.

During our few hours in Exeter, we also watched some Irish dancers performing in front of the Cathedral, bought some knick-knacks in the Yard stalls and walked hand-in-hand down the narrowest street in the world, Parliament Street, until we could not fit side-by-side anymore (because this peculiar thoroughfare narrows to the width of a single person where it T-junctions with the High Street - reasons why, unknown).

Having rusted-off the barbeque, that evening we had a delicious burger-fest in the garden, surrounded and serenaded by a screeching screech of evil looking gulls lining the neighbour's rooftops. The day of our return to London, we braved the crowds of grockles in Dawlish Warren and partook of crazy golf and other activities, including a few boxes of freshly fried and sugared donuts. No trip to the seaside is complete without a box full, or three, of greasy grockle donut fodder.

Before leaving you with dreams of hot donuts by the sea, a quick shout-out to Huw's friend, whom I met at the legal eagle's earie and who predicted that Elliott Daly would win the last Lions test in New Zealand with a 65-yard penalty kick in the 77th minute. He surely could not have been any closer. Daly did indeed kick a monster penalty from some 60 yards, but it was Farrell who kicked in the 77th and sealed a rare and iconic draw against the infamous All Blacks in Kiwi Land. Even though the result was reported as an experience akin to "kissing your own sister", many congratulations to the boys, let's keep the Lions initiative alive and, of course, kicking, and sorry to Huw's friend, but no cigar on this occasion. That said, a small cigarillo might be in warranted for being so very nearly prescient - accompanied by a donut perhaps.