This was a first for me. I had never been to the world-famous and highly desirous Maldives before. No one wanted to believe me that this was a business trip and I received countless offers for porter services. But let me tell you, it was not holiday. Just take a look at the photographic evidence below. 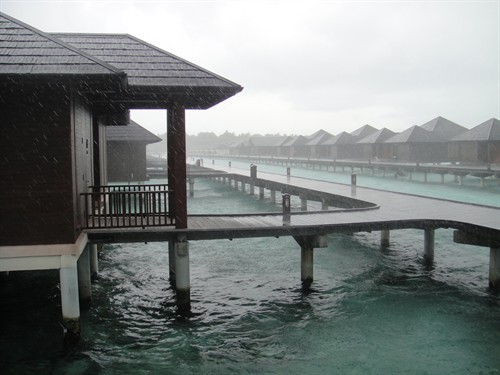 My trip coincided with a cataclysmic IT failure at British Airways, but fortunately at this time of year (low season) BA does not fly to Maldives and I had booked on Emirates (again). At Heathrow T3, despite the full IT functionality of Emirates, the queue for check-in was literally out of the door. Staff controlling the crowds insisted that I join the conga chain, but, having checked-in online and having hand luggage only, I applied lateral thought and snuck into a side entrance, and headed immediately to security.

Although my clever queue dodge got me to the plane on time, our flight was delayed an hour due to heavy traffic over Europe as BA tried to catch up after its flightless 24 hours the day before. My flights via Dubai were a delight. Emirates and the A380 are made for each other. Even the transfer in Dubai was a breeze, which was just as well as my two-hour transfer window had been reduced to under one because of our delayed departure.

Our approach into Maldives was a portent for the week to come. The sky was heavy with great lumps of cloud and we caught only glimpses of the islands below, including a long chain of bare sand banks linked by narrow sand isthmuses, which turned out to be one of the many reclamation projects for new resort development.

In fact, Maldives was aglow in the heat of a major development boom. Velana International Airport was being extended and a new runway was due to open in 2018. A bridge linking Hulhulé island (home of the international airport) to Malé was nearly complete, and to the north the new island of Hulhumalé was abuzz with construction and the finalisation of its reclamation as an annex to the capital island of Malé. Along the length of this nation comprising a double chain of coral atolls, five new domestic airports were in development and the existing airports at the northern and southern extremities are ready for full international services. With some 90 new resorts in the pipeline (currently 123 existing resorts), such investment in infrastructure was no surprise and very reassuring.

My travelling companion and I stayed at a hotel on Malé (the first hotel where I signed in and checked my bill on an ipad), and from this business-like base we explored multiple islands (14), resorts (9) and hotels/guesthouses (5) across North and South Malé Atolls. Maldives is a little like Venice on 'speed' - the distances are greater, the water rougher and the boats an awful lot faster. We hired a local speedboat to get around, powered by two roaring 250 Yamaha outboards, and this aquatic wave hopper powered us through the monsoon conditions - slamming into white crested waves, wallowing around high swells and cleaving through the rains. Definitely not the experience portrayed in the brochures (no wonder this was low season). The monsoon was so strong one morning, with window-shuddering winds and lashings of horizontal rain, that we were advised to stay in our hotel until the weather cleared.

We visited both private 'resort' islands and public 'local' islands, and everyone was super friendly and welcoming, even when we arrived at 'resort' islands without confirmed meetings. The beaches were stunning (although not strictly white, unlike Zanzibar where the sand is truly powdered snow) and the resorts other worldly. As this field visit was during Ramadan and Maldives is a Muslim country, I was on a demi-fast (no food during the day, but I did have to partake of the odd liquid refreshment in order to keep my pecker up). But full respect to my travelling companion, who was fasting properly and kept on going through the physical boat trips and multiple meetings from sun up to sun down without any ingestion.

Whilst the 'resort' islands are exclusively let to a single resort and are entirely self-sufficient (with their own power plants, desalination facilities and housing for all staff), the 'local' islands offer a completely different perspective and more affordable overnight accommodation. In the last 10 years there has been an explosion in the number of 'local' hotels and guesthouses. Our hotel on Malé was simple, but fit for purpose. My 12th floor room offered panoramic views of downtown Malé (a tightly packed stack of high rise buildings hemmed in on all sides by the ocean and multiple quaysides) and the speedboat/ferryboat harbour from which we launched our wave-riding adventures to the outer islands. The rooftop bar and pool made for a pleasant working environment and evening refuelling stop for Iftar breakfast, whilst watching the jets and seaplanes come and go from Velana International. 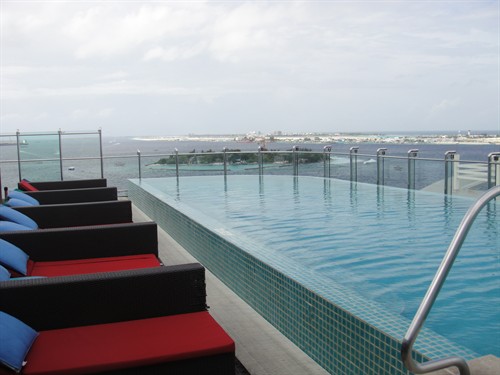 I left Maldives feeling very lucky to have experienced this unusual destination in a very unique way. Few people will have seen as much of this amazing country in such as a short time. My return flight with Emirates via Dubai was not as breezy as the outbound. The transfer window in Dubai was six hours long! Having toured the shops twice, I tried to grab a few hours of sleep on a lounger-like chair. Although these loungers looked comfortable from a standing position, when you actually sat or worse try to lie on one, they quickly became quite painful. The discomfort, the constant bing-bonging of the PA system and the bright lights (which I tried to block out with a t-shirt wrapped around my head) meant that I hardly slept and arrived back in the UK some 24 hours after leaving my Malé hotel exhausted and in desperate need of a shower.

Final thoughts: With the resort/hotel product rapidly expanding and diversifying in Maldives, cheaper accommodation options are opening all the time, so, if you get the opportunity, go to the Maldives - it is unique and stunning (even in monsoon conditions). Try to visit and/or stay on different islands and get a cross-section of experiences. If you don't mind the odd drop of rain and choppy seas, visit in June, when prices are significantly cheaper. And, don't forget your insect repellent, unlike yours truly who did and was eaten alive on Kani island, and still had the scars to show for it as he typed this blog a week later.