Where else on this marvellous earth can one ski in the morning, sun bathe on a sandy beach in the afternoon, drink great value wine, see Colonel Gaddafi's private jet and visit the centre of the universe? Perpignan, naturellement!

I was invited to the Roussillon to speak at seminar for the regional great and the good. My flight to the Med was with Ryanair from Stansted, which meant a very early start and one-hour taxi ride at 04.00. It has to be at least eight years since I last flew Ryanair or from Stansted. Ryanair has not changed much (besides becoming the largest airline in Europe and carrying more international passengers than any other airline), but Stansted has become a tightly compressed zoo. In 2010, the airport handled some 18.5m passengers and in 2016 a record 24.3m passengers. Judging by my little time there last Thursday, it is well on course to beating that record too. The place was standing room only, shoulder-to-shoulder and as hot as the underworld.

We took off into a bright blue sky and beaming sunshine, and landed in what could easily have passed for a Scandinavian winter - high winds, grey skies and very cold. Apart from the meteorology, the most remarkable sight at Perpignan Airport was a pristine looking A340 with the colours and a crescent/star motif I recognised from many visits to North Africa. My host confirmed my suspicion and advised that the plane was once Colonel Gaddafi's luxury private jet that has been impounded since 2012 (when it visited for a regular maintenance check at the Roussillon's largest private sector employer, a specialist international aircraft maintenance facility) and has become a local landmark ever since.

My hotel was located in the heart of the city, close to the old town and one of the few surviving historic buildings, the Castillet (the sole remaining part of the city walls, destroyed in 1904 to allow for urban expansion). The Castillet was a main gatehouse into the city, designed as a fortress and used until the end of the 19th century as a prison. Today, it houses a small museum and has pride of place on a large open square/intersection, overlooking the city's canal.

My hotel room was small (circa 16 sqm), but perfectly laid out. It contained all the amenities you need and was a joy to use. There are lessons here in how to design an efficient hotel room. It is a shame the rest of France is not of the same level of efficiency. The city was suffering its 11th consecutive day of a bus strike. Imagine a city without public transport for 11 days straight.

My host and his associates drove me out of town and into wine country, where we had a delicious lunch in an old winery. I could not resist the grilled snails and local charcuterie, including the best boudin I have tasted in decades. The wine was fabulous and the whole experience wonderfully a la francaise.

That evening we drove to Le Barcares on the coast for the evening seminar. The venue was a large multifunctional hall near the beach. The event attracted some 300+ delegates, including local mayors, business people and other key stakeholders - a great turnout for an inaugural event to help promote change and dynamism in the Roussillon. I wish the association the very best of good fortune going forward.

The following day I had a couple of early hours spare before my host drove me to Girona for the return flight. From my hotel, I walked west to the centre of the universe, better known as La Gare de Perpignan. On 19 September 1963, Salvador Dali enjoyed a moment of "cosmogonic ecstasy" and declared the station the centre of the universe. To be fair, Dali was a frequent visitor to Perpignan and spent much time in the station contemplating life and being inspired with his best ideas whilst sitting in its waiting room. 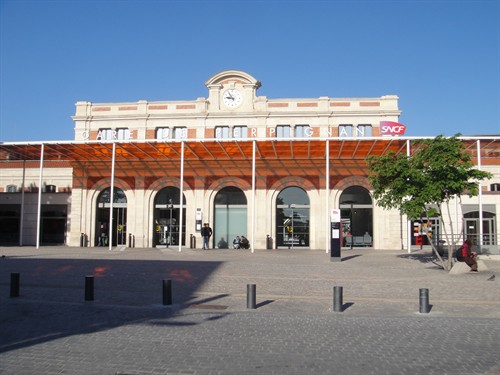 From the station, I walked back to the centre, through the Castillet (the museum was closed that early in the morning) and into the old quarter, past the cathedral and south to the fortified citadel of the Palace of the Kings of Mallorca - yes, Mallorca. In 1276, James I the Conqueror, King of Aragon and Count of Barcelona, founded the Kingdom of Mallorca and declared Perpignan the capital of the mainland territories. The city is still proud to consider itself a part of Catalonia and flies the Catalan flag on public buildings.

My amazing host came to the hotel mid-morning and drove me all the way to Girona. The day was gorgeous and we enjoyed crystal clear views of the snow-capped Pyrenees as we drove over the southern slopes into Spain. On the outskirts of Perpignan, we passed by a huge fruit and veg market and distribution centre, the largest in Europe, from which fresh produce from the prolific gardens of Spain are sent forth across the continent of Europe. In Girona, we got lost and my iPhone came the rescue in the face of a failed French sat-nav in the car and French-style signage on the city's streets (you know what I mean, some airport signs to begin with, then nothing for miles, and then again once you're on top of the thing!).

Having visited the centre of the universe and spent some time with the locals, this is definitely a part of France to revisit as a genuine tourist with time to enjoy everything on offer. I wish my French cousins the very best for the elections on Sunday 7 May 2017 and may the best man win.