As I am sure many of you have had an equally unfulfilled desire to my own, and I thought I would share my enthusiasm for a trip to the new Chiltern Firehouse in Marylebone, London. The venue (for it is far more than just a hotel, and only opened its doors as a hotel some many months after the celeb-magnate F&B outlets) opened in early 2014 and for a mere mortal such as myself securing a table has been more impossible than a chocolate teapot retaining my granny's favourite brew.

In July, I tried to book a table for lunch or dinner on any day in August, only to be told that the next availability would be in October! How do all these celebs know where they will be two to three months from now? Conspiracies suggest that celebs are being persuaded and rewarded to visit at short notice as part of the venue's opening marketing campaign. Whatever the facts, it is immensely popular and hard to gain entry.

Not one to give up easily, a couple of weeks ago I arranged a breakfast meeting and called the Firehouse on the theory that celebs are not early risers and the Firehouse would not be crammed wall-to-wall with Hollywood A-listers. It worked. I managed to book a table, with only two weeks' notice. The day of the booking was this morning.

Matt and I were both very impressed with the restaurant, bar, lounge, reception, lobby, courtyard and the whole package. Simple, but very homely décor, akin to your favourite, very personal countryhouse hotel, mixed with English panache and lots of heritage. I have been to a few converted early 20th century former London fire stations now, and this is the best execution so far.

Obviously I had eggs Benedict, which did not score highly on the Benedict scale (small eggs, no yolk, weak Hollandaise and the muffin was cornbread laced with chilli). The highlight of our visit though was finding Naomi's Pole. Only last night, the Evening Standard had a short article praising the Firehouse yet again and suggesting that Miss Campbell had been swinging on the fireman's pole only the night before.

The photo below shows just how keen "Matt in the Mack" was to be associated with Naomi's Pole, however, if you do get a chance to dine at the Firehouse, I strongly suggest that you go on a "Naomi Night" and not for a "Matt Matinée". 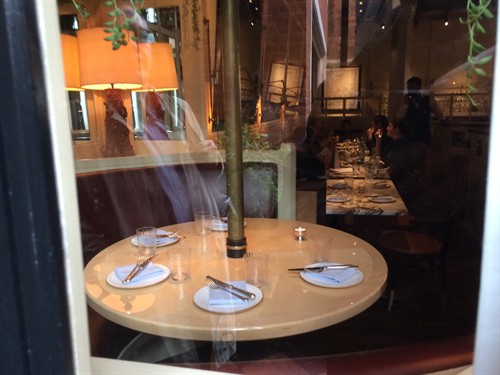