It's official, my lovely wife and I are allergic to Cyprus in the summer time. But more of that later.

En route to the best terminal, in the world, I asked our taxi to detour and drive past our Heathrow T4 hotel project, scheduled to open in early September 2018. It looks great from the outside and with luck I will get a full tour soon. Our driver was one of the best in a long time and curious about my profession and interest in hotels. Being Nigerian, he was keen to know on what hotels I had worked in West Africa. I told him we have worked on a few from the desk (awaiting fees that were never paid), but never had the pleasure of visiting the region (aside from Cape Verde, where we lost money on all three separate occasions). Lovely man that he was, he was sorry to hear of our West African misadventures and wished us well with T4.

As is becoming all to frequent, our BA plane was a disgrace. It must have been the oldest, most tired and most neglected in the fleet. There was dirt and food stuck in all the cracks around the floor, the TV failed (standard these days), my lovely wife's seat was decrepit and part of the frame stuck in her bum (not pleasant after a major operation), and the wings were so filthy I am surprised the machine retained any form of aerodynamic integrity. Even the staff looked done in. How much longer can BA survive in this manner? Both the hardware and software must be on their last legs, as most recently epitomised by the ba.com hack.

During our fun filled flight, my wife surprised me by asking that surely as a loyal BA Gold Member she was a member of the Mile High Club. It took a little while to explain the difference between frequent fliers and soaring libidos.

Being the height of the season, the passport area was packed, not helped by some kind of passport verification devices, which in their obscure wisdom the Cypriot authorities had installed in a half-donkeyed attempt at the e-gates other airports use to great effect. The Larnaca Airport machines took a picture of my passport and face, and spat out a print of the foregoing on fax paper. Remember fax paper? I have not seen fax paper in over 10 years. We then had to queue for the passport controllers as well. I guess the extra 'machine-experience' did pass the time and provided a distraction from the humdrum of queuing. Not sure that was the intended purpose though, especially at the price such machines must have cost. I still don't get what they are for and blow me down if they did not reappear in the departures passport control area as well - and we did not even use them. We skipped right past them and presented ourselves to the controller without fax paper.

We spent our first week in Nicosia, during which rashes, spots and other cutaneous eruptions affected my pale Anglo-Saxon skin as various insects and allergies assaulted my senses and made sunbathing an interesting pastime. We spent the second week in Paphos where my conditions evaporated and my lovely wife suffered in turn. However, thanks to our favourite bodybuilding Paphian pharmacist, and a few pills and creams later, she was back to her full self in no time. The result, our third and final week was skin condition free and we thoroughly enjoyed the sun and tanning in peace.

Based on our brief time in Cyprus, it is evident that the economy is recovering in places, but such recovery is still patchy (a bit like my skin). Although tourist numbers are up, their spend is down (probably due to the overwhelming conversion of hotels to all-inclusive). Whereas shops and apartment blocks in Nicosia are increasingly vacant, developers in Limassol are going crazy with major new tower block projects (some very striking and many predicated on the popularity of Cyprus's CIP program). Paphos was looking great after its European Capital of Culture 2017 makeover, and yet the Eleftheria Square project is still ongoing after some five years already of digging around the old Venetian walls of Old Nicosia. The owner of the Mall of Cyprus had to sell it (and other assets) and will no doubt pump his proceeds into his recently planning-approved mega-resort on an old mine near Polis. Whilst many locals are heavily in debt (many NPLs have been sold to third-party companies, as the local banks could not face the reputational risks of foreclosing on their own people), the mega-casino development near Paphos is underway (I can't wait to see how an inland, 500-key casino hotel, without beachfront, will perform on this sun-sand-sea holiday isle). Maybe the newly arrived oil barons will keep the casino resort afloat, much like their rigs that now populate Limassol bay.

This summer we broke with a 14-year tradition, in which we have stayed in the same hotel, in the same rooms, on the same days, in each of the last 14 years. This year we checked into the Elysium for the 15th time in 15 years and they had the temerity to give us different rooms! You can imagine my lovely wife's horror at such injustice and following lengthy discussion we were finally shown to our different rooms with a promise that if we did not like them we could move to our usual rooms the next day. Surprisingly we did not move. The different rooms were amazing. We were right over the hotel's private bay and one was a corner room with glass doors on two walls - bay/sea view on one side and pool/mountain view on the other. They were so good, we might even choose them again next year and initiate a new 14-year tradition. 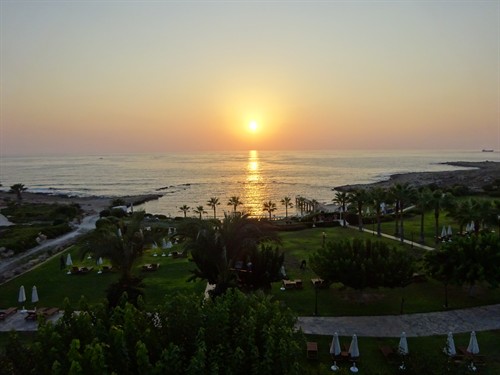 If you read last summer's Cyprus blog, you may recall that our hotel was refurbished in the winter of 2017 and the end result left quite a bit to be desired. We were keen to see if any complaints had resulted in any material changes. The lobby was the same, no change, and still looked like a Moroccan harem devoid of people. For some reason it no longer engenders one to loiter and just chat or play tavli (Cypriot for Backgammon) any more. In the rooms, a series of bodges have attempted to fix the errors. The TV has been moved along the wall, away from the credenza's flap, leaving behind exposed sockets and wires. The original flimsy credenza flap arms have been replaced with beefier arms and the muscular upgrade certainly works better, but they do need to do something about the gauges left behind by the weedy limbs of old. Padding has been added to the walls around the luggage rack to stop suitcase marks (done quite well actually). No bodges in the bathroom though. It remains a towel-rail free zone, a flood zone during shower time and the plugs still don't plug. Why do hotels promote green behaviour when they can't even do the basics, such as preserve water with a properly fitting plug? But, the bodges did extend to the tavli boards. The traditional wooden box boards have been replaced with flimsy cardboard affairs on which the pieces shift about like quoits on a floppy ice rink, and there was only one dice. And, for this high quality toy, we even had to provide our room number as guarantee that such a valuable item would be returned in full. We played in the desert that is the lobby bar - we were the only ones there at 10 o'clock that evening. Still, our favourite hotel does remain outstanding and is one of only four in Paphos that has not sunk into the all-inclusive abys.

In Nicosia, we sun and pool-bathed at the Hilton again, risking life and limb. The Hilton sunloungers will kill someone soon. They cut shins, slash wrists, shatter cheekbones, fracture tibias, cave-in heads and snap your spine when they collapse. There were no new pool personalities of note, just the 'Usual Suspects': Scarecrow, the Hairless Wonder, Mr Hotspur and the Terrifying Tricoteuses (whose caustic, Gorgon death-stares can reduce you to atomic dust if you (i) are not Cypriot, (ii) are not tanned, or (iii) so much as create a ripple in their sacred pool). Even the night stalkers appeared on queue each evening after sunset: Moonwalker, Dolphin and Flapper. My lovely wife's cousin, Christos, swears there is another regular, but we have yet to spot the lesser known Onassis (a sharp chap in a white linen outfit, with red sunglasses and shoes). How do these lovely people survive the loungers of death I wonder?

Three weeks in Cyprus and on the last day a surgical op was required to separate me from our faithful 23-year old car. I must have covered much of Nicosia and all the island's highways in our little blue baby. I was so frequently called upon to drive family and friends around that the enduring term the locals use for me, Philipaki (meaning little, cute Philip), quickly became Philipaxi (meaning little, taxi-driver Philip). Our baby was not entirely trouble-free though. The day after our return from Paphos, the front right tyre was flat (thank goodness it did not blow on the highway). The tyre-guy down the road from Yaya's house replaced it and its twin on the left front. He was amazed our baby managed to pass its recent MOT with such tired tyres and especially as the front left wheel was wobbly on its axle as well. A local mechanic fixed the wobbly wheel in a jiffy and our baby was made good for another few miles.

We had a fabulous time in Cyprus and despite various skin complaints returned tanned and rested. Cypriots are wonderful people and I would like to thank all the bottle donors for their friendship and generosity (especially the owner of Theo's in Paphos, who must be crazier than me and gave me a Jumbo bag full of empties - yes, literally a Jumbo bag; a massive bag from Jumbo the local toy shop). We flew home with our little Greek-learner daughter and were reunited with our well-travelled son. In a little under 12 months, he will have been to Brazil, Uruguay, France, Cyprus, Croatia and the USA. Thank goodness I don't have to Philipaxi him around the rest of the globe as well.