No matter how wonderful the Emirates A380 may be as a feat of engineering and a flying sofa, when your TV does not work properly, you forget all about the comfortable surroundings and purely recall the lopsided experience of TV sound in only one ear. I read this week that Airbus will end production of the big bird in 2021 - perhaps it was the lowly TVs what done it for this engineering behemoth. Sadly, another Concorde moment bites the dust.

We were heavily delayed landing in Dubai for my connection to Dar. Reason? A heavy rain and sandstorm combo. The outbound was equally delayed due to the weather and we arrived in Dar nearly two hours late. At one point, I wondered if we might even make it to Dar, as the flight map showed us passing directly over Mogadishu, and who knows what kit there might be down there if someone was minded to make a statement on the international stage (a la doomed flight from Sharm to St Petersburg in 2015). We landed in Dar to glorious sunshine and 30C, compared to 8C in London and climatic misery in Dubai. I must have passed through Dubai a hundred times over the years, but I cannot recall standing on the tarmac for so long, in the rain, at the foot of the steps, waiting to board. And then watching my top dry to reveal sandy coloured spots, like a fast on-setting case of the measles.

The pleasures of glorious heat, sun and blue skies was short lived though at Julius Nyerere International Airport (JNIA), as we descended into the depths of Terminal 2 and became stuck in the second slowest queue on Earth. It was evident that that all international arrivals were to be funnelled into one stairway. Those in transit, those requiring a medical check, those requiring visas, those with visas and those locals who should be able to pass straight through were all forced together into one giant melee and squished into one narrow stairwell - a kind of three-dimensional rugby scrum. As a visa requiree (I did not get enough time to secure one at the High Commission in London, but note to self, find the time next time), I was in those same few square metres of terminal space for over 1.5 hours. First, you queued to hand over your passport and your finger prints on one of those green scanners. Your passport was returned and then you queued for a Q&A session. Then you queued at a cash desk and lost your passport for 20 minutes whilst you hung around with 40 other folk and waited for someone to pop out with a handful of passports and hoped that they called your name. Then you queued for passport control. Then you discovered that your suitcase had not made it.

My case was stuck in inclement Dubai. Clearly the luggage system at Dubai International was not waterproof. A very nice and extremely competent Swissport guy at JNIA helped me fill in a lost luggage form and assured me that it would come on the next Emirates flight the next day, and that he would arrange for a car to deliver it directly to my hotel. It came at 21.00 the next evening.

Minus suitcase, I hooked up with my driver for the week and we drove into Dar. Rather we crawled and were stationary for large chunks of 20 minutes at a time en route to Dar (great for the Machinga - the inter-car weaving blokes selling everything from nuts to flipflops), until we hit my hotel in the CBD nearly two hours after leaving JNIA (surely the slowest queue in the world). It was a very long day. Just before the shops shut that evening, the hotel porter walked me to a nearby kiosk and I bought a few essentials. Amazing how cleaning your teeth can change your whole perspective on life.

My hotel had seen better days, but put on a brave face and had some wonderful staff. However, nothing could paper over the shabby walls and the flush that kept giving. I had to call for an engineer or the WC would have flushed the entire hotel dry. It just kept going. Fortunately, it did not spill over into the room, but it was a huge watery waste. The engineer fiddled with the 300-year old knob and got it to stop after a few fiddles. Good job I observed the fiddling, as the next flush requirement led to another continuous water flow and I was able to fiddle with success, solo (and indeed every time thereafter - reminded me of my youth, cleaning and fixing toilets on campsites in the south of France).

I had the first of my nightly dinners in the rooftop Thai restaurant. Great views over Dar harbour (busy waters, a bit like my toilet), a tired and very dated dining space (a few token Thai figurines, with early 20th century English seaside chic carpets and wallpaper), very friendly service, but below par food. First night was fried grouper and chips, second was a rubber-chicken Balti, third a surreal Valentine's evening buffet (live love music, rose petals, red balloons and not a lady in sight) and for the fourth I finally succumbed to the vague Thai influences and ordered a watery Thai green curry. 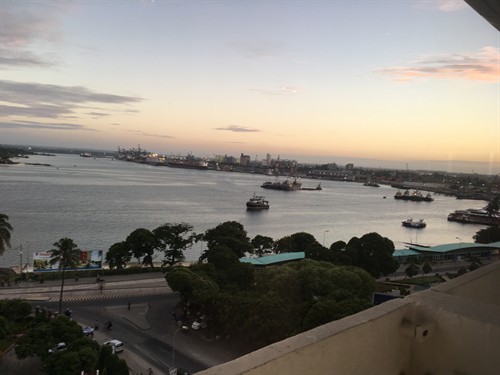 On the work front, we spent a day driving up and down airport road (much of it in a stationary position and watching the Machingas), meeting with government departments and inspecting the airport 'hotels'. Next day we spent meeting ground handlers and visiting the hotels to the north, along the coast. North of the CBD, Dar was beginning to look a bit like Sheikh Zayed Road: lots of new shiny towers. Dar is one of the fastest growing cities in the world and is currently sitting at around 5m inhabitants. The WHO estimates the population could hit 76m by 2100. Yes, 76m. That is not a typo. It will grow at a CAGR of 3.4% per annum for 81 years straight, which makes for a lot of babies and means the traffic will be unbelievable. Day three, we interviewed managers and inspected the city centre hotels. My driver was awesome.

My return to London was a two-leg affair, a flight to Muscat on Saturday, followed by a flight to London very early Monday morning. We left downtown Dar in good time, to allow for the horrendous traffic, and hit the airport within 15 minutes. There was no traffic. Even the new railway construction area (which caused one of the longest stationary delays during the midweek along the 12km airport road) did not slow us down. This new railway will be elevated at this point (presumably to pass over the stationary traffic and to guilt-trip everyone into rail travel) and drops back down to earth near the harbour area, where presumably a station will be built. For the moment the lines are coming, but there is no station. One step at a time, I guess. No pressure, what with some 70m babies in the pipeline!

The flight from Dar was delayed (three for three so far) and empty. Of the 200+ seats, only 12 were taken. En route to Muscat, we popped into Zanzibar and the plane filled to capacity. On landing in Muscat barely 10 people went to arrivals. The bulk was in transit. My arrival was further delayed by very suspect luggage handling. The crew's cases appeared first. Then a few for those who boarded in Zanzibar and then some 20 minutes later the cases for those six of us who had boarded in Dar all those hours ago. I got to the hotel at 02.00 and prepared for my 11.00 meeting.

Meeting was followed by a fabulous lunch in a local Indian restaurant, on a hill and offering panoramic views of the ocean on one side and mountains on the other. So good to have tasty food again. Another meeting followed lunch, then back to the hotel to prepare for the final flight home. It had been a few years since my last visit to Muscat, but clearly there had been significant new development and with luck I will revisit soon and see more of this friendly, historic and wonderfully atmospheric metropolis.

The new Muscat International Airport is quite a beauty. The architecture is very wavy (reflecting Oman's seafaring heritage) and the inside is all shiny, spacious and well lit. However, air-side there were few seats and those that were available were too designer to be sat on comfortably. The floor became my seat of choice. The flight left on time and arrived at Heathrow T4 20 minutes early. Before heading home and a reviving shower, I met my lovely wife for a quick morning coffee and a delayed Valentine's cuddle at T5, ahead of her departure to Germany for a couple of days. We will be reunited soon, on the canals of Venice. A far more appropriate setting for any further delayed Valentine's activities than Heathrow T5. Karibu!