This is my last staycation short of the summer, corresponding with our last summer minication and my first two days of annual leave of 2020 (note for Paul, if you're still counting). The kids and I travelled to Dawlish by train. A bit busier than last time, but still relatively quiet. There was even room for me to move to a window seat behind my son when the Train Manager rebuked me for being in an aisle seat (social distancing with the trolley-dollies and other passengers passing by were given as reasons).

Crossing over the platform bridge at Dawlish station, we could see that the first stretch of the new defensive seawall was very nearly completed. [Correction: in previous Dawlish blog, I stated whole length of proposed wall was going to cost £30m, in fact only this first phase has cost £30m, equal to £75,000 per metre]. It looks hideously institutional. Gone are the local granite blocks and elegant finishes, and in has come blank, soulless concrete. It is so massive, despite its short length, it must be visible from space. Any would-be Green-men out there on Planet Zog will also now notice a slight wobble in the Earth's rotation as a result of this lopsided weight on the South Coast of England. More to follow.

From the bridge we also saw that the cruise ship carpark off Teignmouth was even busier than before. Two of the beasts were moored there, dwarfing the surrounding cliffs, even from a perspective of several miles distant.

As we drove from station to grandparents' house, we passed through the beating heart of glamourous downtown Dawlish and crossed over Dawlish Water (home of the famous Black Swans). Instead of being the usual casual, elegant, swan-friendly flow, the Water was a raging torrent of chocolate fudge sauce. That day's summer storm had clearly disturbed the hills and fields upriver to such an extent that the runoff gushing down the Water was a thick brown colour and had overrun the modest banks. Even the sea around the Water's estuary was brown (and frothy in the waves, like a giant milkshake ready for a Great White to quench his thirst after a nibble at a Grockle's ankle). Any more of this Willy Wonka business and next thing we will have a delta forming at the mouth of Dawlish Water (unlikely, given Dawlish faces east in one of the world's most violent seas, hence the constant upgrades to the seawall and the UK's most expensive stretch of railway).

Our first excursion during our long weekend was a drive around Dartmoor, in search of ponies for my daughter and a moody pub with a werewolf out back for lunch. We saw loads of ponies, including a mother and foal in the middle of the road (ever seen a six-legged pony before?). 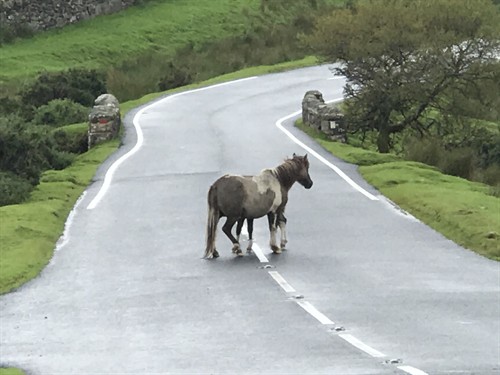 And found a lovely hotel at Two Bridges for lunch (my teammates did not fancy the moodier looking pubs of the moor). After lunch we walked along the tracks and trails to Whistman's Wood, an amazing and unique moss-covered habitat. Every tree and boulder were covered in the green stuff. I hope the constant flow of visitors does not become too great or the moss will be worn off in no time (there were many walkers of all shapes and intensities, from casuals like us to serious pros with all the proper kit). Our trudge back was made all the more moor-atmospheric by a summer shower of substantial precipitation.

Our moody moor tour took us through Princetown and past its main source of employment, Dartmoor Prison. Did you know, that when you look at Princetown on Google Earth, the prison appears as a massive flying-saucer from Independence Day on the northern edge. We did not see any Harvesters about the village, but we did discover that this English icon is to close in 2023 as an institution for naughty boys to remain at Her Majesty's pleasure. Maybe it will lift off back to planet Harvest after that and leave more moor for the moor ponies.

Devon is known for its sunken lanes, whereby smaller roads were deliberately laid below the prevailing ground level of surrounding fields and lined with high hedges so as to protect folk and traffic from the strong Atlantic winds. All good logic, but useless for tourists wanting to see the vistas from a car. But, on the moody moor, there are few such sunken lanes and the vistas were spectacular, across patchwork fields and raw moorland, through and above granite dry-stonewalls, to thatched-cottages and moody pubs nestled in tiny moody villages of three folk and a dog. I just hope the authentic granite stone walls will remain and won't be replaced with seawall-style concrete.

Next day was a busy mix of Dawlish Warren activities (go-karts, with very little 'go', perhaps because first run of the day, crazy golf and Dumbo), a visit to Exeter (to check on delayed trains due to a fatality near Reading, a quick purchase of Exeter Brewery's finest beverages and the demolition of a Devon 'paaastie' in Cathedral Close) [Note: The Clarence sold whilst we were in Devon, or at least the hole that was once formerly known as The Clarence], and back to Dawlish for two return trips to the station (one to drop off my son and a second to pick up my wonderful wife). We concluded the day with fish and chips washed down with a tasting of two sparklings, from New Mexico (USA) and Sussex (England). USA won.

Sunday was another full day trip, this time to Dartmouth. Many more sunken lanes later, we caught the park-and-ride into this gorgeous little tucked away gem of a riverside town. It was not quite as old and medieval as I was expecting (I had something like Aigues-Mortes in my mind), but lovely and fascinating nevertheless. We took the Lower Ferry across to Kingswear whereupon, in the heights of this quiet village, I fell in love. We discovered perhaps the most adorable homes with the most amazing views in the UK. Views up the River Dart and of the surrounding countryside. One could easily imagine retirement life here, wasting days watching the river under a glorious sun. Stunning spot, well worth the effort, but please don't all rush there at once.

Our final day was brief in Devon, as we caught a mid-morning train home (the Teign Train to Exeter was empty again). Aside from a minor incident of parking rage at Dawlish station (grandfather briefly butted heads with a lilo-wielding Grockle), our return was swift and comfortable, and I did not even have to move out of my aisle seat when the Train Manager and trolley-dollies passed by (there's C19 consistency for you). Trains have been a veritable joy at this time (provided no fatalities on the line) and to be highly recommended over driving. Peep, peep!