I had lunch with a friend last week and the topic of my recent visit to Didcot, near Oxford, came up. He asked why there was not a blog for it. So, just for you Andrew, here is a quick blog on my visit to Didcot two weeks ago.

Didcot is a small town in South Oxfordshire with high ambitions. It is already at the centre of Science Vale UK, which encompasses a number of nearby business parks and scientific research centres. Statistics suggest that the area accounts for 13% of R&D and 4% of employment in England. Key establishments include Milton Park (one of the largest mixed-use business parks in the UK) and Culham Science Centre (where serious boffins are spear-heading the UK's fusion research and is home to the world's largest fusion experimental facility).

The local authority is investing heavily in new road transportation links, improvements to the railway station and has released extensive land holdings for new housing. One of these new projects will be realised on the former Didcot coal-fired power station site. Indeed, the weekend after my visit three of the six giant cooling towers of this once iconic landmark were blown to smithereens under cover of darkness, which means my photo below is one of the last to capture these metaphors for a bygone power generating age. 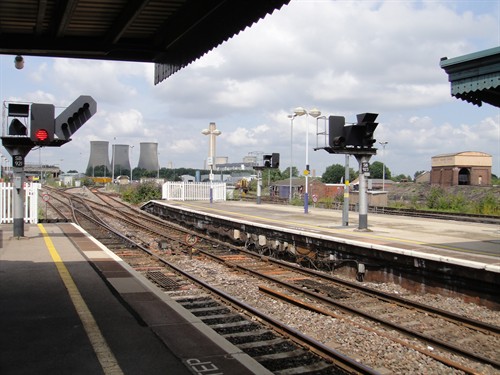 I travelled to Didcot by train. Again. I am becoming quite the railway-man these days. Although not to such a degree that I felt compelled to add an hour to my return journey and visit the Didcot Railway Centre. The centre is a full scale museum, with former engine sheds exhibiting genuine rail artefacts and retired engines. There are even Steam Days for the serious fanatics, during which you can see and ride locomotives in steam (including Thomas the Tank Engine, if you are really lucky).