Golf is a quiet interest of mine and something I will pick up more seriously in later life. My golf experience is very limited, having learnt to hit a ball in nets at The Regents Park Golf & Tennis School in central London. Unfortunately, the School closed some eight years ago and I lost my training facility. The Royal Parks wanted to redevelop the site into floodlit football pitches, which never flew because of local resident objections, including mine (What were they thinking? Replacing a gentle sports facility into a high adrenalin, high volume eyesore). Consequently, I only hit balls once every two to three years at the moment.

So, when I was invited to play at a charity golf day at Wentworth yesterday, I was torn between wanting to play at one of the premier clubs in the world and embarrassing myself completely. In the end, curiosity and passion overcame hesitation and ego, and I had a great time.

Being a "hacker", I was placed in the "hacker" group and we started off the 18th tee. My team consisted of a good player, myself and two team mates who had never played a course before. It took us a good five hours to get round the Edinburgh Course and when we completed the 17th hole, we decided to replay the 18th on our way back to club house. A useful exercise, as it confirmed that my technique and game had improved over the afternoon. My first attempt at the 18th scored 10, my second 8 (not great, I know, but an improvement nonetheless). Total score for the day? 138. Shots of the day though belonged to Alejandra who played for the first time in her life. She parred the 17th over water (3 shots) and came second in the Nearest-the-Pin on the 2nd. Also, full respect and much appreciation to our skip, Sam, who showed incredible patience staying with us over 19 holes and giving us lots of useful tips.

The evening event was good fun too, although the after-dinner speaker, Neil "Razor" Ruddock, failed to make the cut (having injured his shoulder 9 holes into the tournament, lifting "pies" someone suggested) and had to leave early. Another footballer, David Hillier (formerly a mid-fielder with Arsenal, but we did not hold that against him) stepped up to the dais and adlibbed brilliantly, answering random questions from the floor. Well done David at such short notice!

A quick word about the charity - Tackle Africa is an excellent and well executed idea, and deserves lots of support. It aims to educate young people across Africa about HIV prevention through football coaching.

Today is our finance director's birthday and he has been desperate to play Wentworth all his life. So I brought back a divot (don't tell the green-keeper) and a ball as a fitting birthday present. Not quite the same as playing the course, which is something I will never forget, but a lot better than a poke in the eye with a seven iron. 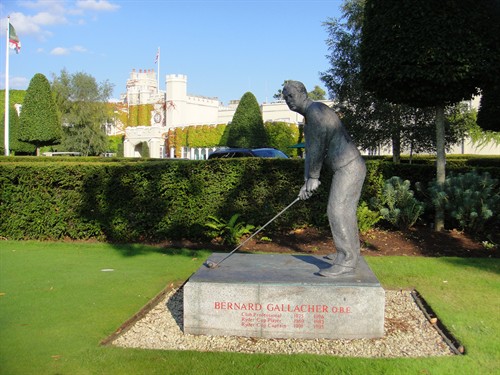