This week I had the privilege of chairing the Global Hospitality Summit for the fourth year running and this year the organisers were hosting in Dubai. They booked me on Emirates out of Heathrow T3, but at no point did I meet Jenifer Aniston, Emirates' new advertising muse. Very disappointing. After a quick snack at Oriel (5/10 on the Benedict Scale) I boarded a double-decker A380. This behemoth was only a third full and I had a whole row to myself.

Our flight was delayed 45 minutes as we waited for Heathrow to de-ice the massive wings and the take-off, when it eventually arose, was majestic - the quietest and smoothest air-bound experience this side of a glider. The inflight entertainment is top draw and the technology perhaps the easiest and most response in the air today. I watched "The Martian", which was quite emotional given our Major Tim was in orbital residence on the International Space Station at the time and one of the sound tracks in the film was "Starman" by David Bowie, who passed away only a few days before.

Having travelled to and worked in Dubai since the early 1990s, I have experienced many landings at DXB over an extended period of time. However, this trip was the first at night for perhaps five years. In the late 2000s, the view on approach used to be filled with ribbons of flashing yellow lights, as convoys of construction vehicles circulated around the emirate building a vast new economy at breakneck speed. This time, there was no yellow to be seen. How times have changed. Dubai's economic evolution is evidently plateauing onto a far more normal trajectory and what was once home to 25% of the world's cranes in the Noughties is now much more mature in its middle age.

For a hotel guy, Dubai is manna from heaven. There are so many iconic properties. During my visit I was invited to a number of repasts, including dinner in the subterranean fish restaurant of the Burj Al Arab (where the submarine lift was still out of action 10 years after my last visit) and lunch in the sun on the jetty restaurant of the One&Only The Palm overlooking the ocean and Atlantis in the distance. Speaking of iconic buildings (and one of my favourite hotels), I also passed by The Address Downtown, last month's unfortunate fiery star of New Year's Eve. In keeping with Dubai's incredibly positive, can-do attitude, the hotel was already covered up and being restored. Fortunately for Dubai, the cause of the conflagration was revealed on the night of my departure to have been a faulty spot light on the 14th floor. Hopefully this event will ensure that the iconic buildings of the future will be clad in more appropriate materials in such a hot, dry and tinder-rich environment. 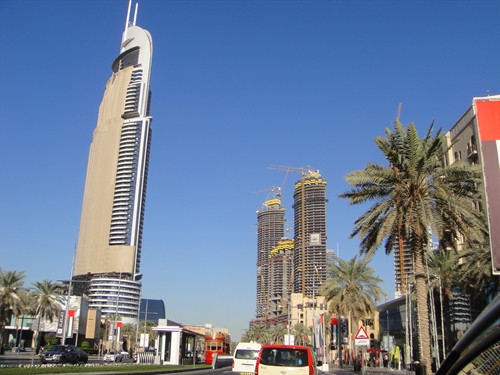 For a hotel guy, the Summit's host hotel was perhaps the most soulless property in the emirate. Without getting into details: the bedroom was most inefficient (whereby much of the 38sqm room was wasted in a pointless corridor), the bathroom narrow (so that whilst seated on the throne one's knees are just an inch from the shower door), the wardrobe opened to within an inch of the bed and the desk faced away from the TV fixed to the wall. The F&B was no more inspiring: the only speciality restaurant was closed for a private function when I needed evening sustenance; the "market" sold a vast range of bread and olive oil, both unsuitable for a growing lad (and what was the idea of projecting old rugby matches on the wall where no one can see them?); the rooftop lounge was duller than a third-world airport lounge (with no bar, few seats and no character), although the 34th floor view were tremendous; and, the lobby lounge service was slower than my lovely son on a Sunday morning. However, my biggest issue with the property was the public WC off reception. I wanted to change quickly before heading to the airport for my 3am flight and, on the porter's advice, I requisitioned the access-cubicle for a Superman-style transformation only for the lights to go off half way through. All the lights - those in the sink-area and those in the cubicles. There was no motion sensor in the cubicle so I had to complete my metamorphosis in the dark. Imagine, how would a disabled person cope in such circumstances? I had to open the cubicle door to activate the motion sensors in the sink-area to get the power going again. Back in the cubicle, having repacked and washed my hands, I realised there were no towels or hand-dryer in the cubicle. Really very poor all round.

Funnily enough our take-off from Dubai was not delayed by icy wings and we headed home without a hitch. Again we flew an A380 and again it was mostly empty. And yet, for some reason, the chap behind me asked for an upgrade to Business Class when he could have stayed in Economy and enjoyed the entire row of seats to himself, like I did (luxuriating in a full length nap across four seats!).

My love of Heathrow was tested on arrival back in London. First, there was a passport check immediately after the air-bridge, which meant 200 passengers queuing in the cold awaiting their turn (London was 1ᵒC, compared to 26ᵒC in Dubai). The UK Border lady who checked my passport was impressed with the size of my book and the number of visas therein ("Wow! You get around!), was very interested in my multiple visas for Libya and Saudi Arabia, and had never seen a St Helena stamp before. The second (regular) passport queue was long and slow, and the luggage from our flight was delayed due to a technical hitch at the aircraft. Finally, I missed an Express to Paddington by half the width of a platform and had to wait another 15 minutes for the next one. All in all, from plane to train took nearly 2 hours! My longest arrival sequence in many years and no Jenifer in sight to ease my pain.