Within 24 hours of landing in London after a whistle-stop tour of Jamaica and Atlanta Airport, I was in the air again with my lovely family winging our way to Hamburg for a Christmas party. Aside from the usual lovely wife-induced pre-flight coffee chaos, not made any easier by the temporary closure of her favourite caffeine dealer, Eat, we left without a hitch and no missing family members. Interestingly, despite a fleeting offer of breakfast at the infamous Japanese venue in T5 (see previous Phil's Travels), the kids thankfully unanimously quashed the idea without taking a breath.

Hamburg Airport (approx 15m pax per annum) is a shadow of Heathrow or Atlanta, but far more charming and interesting than the latter. It is the fifth busiest airport in Germany, despite Hamburg being its second largest city and economic centre. Arrivals was a breeze, our cases were waiting patiently for us on the carousel and the taxi rank an organised treat.

We arrived at our hotel mid-morning and of course our room was not ready. Therefore, having checked in and left our luggage, we headed for the city centre and Rathouse Square. My lovely daughter, new to Germany, was looking forward to a square full of rats with some trepidation until I explained that a Rathouse in Germany is the town hall. The square was humming with people, food stands and Oompah Bands, but thankfully no Lederhosen, as the Xmas Market season was in full swing. Most of the stalls were food and drink related, with very few selling merchandise to inspire Christmas shopping lists (I found more present material in London's Winter Wonderland this last weekend than in all the Xmas markets of Hamburg). My son declared the Rathouse Square, melt-in-your-mouth, deliciously-juicy, freshly carved, warm ham sandwich the best food of 2015.

As the kids were somewhat punch drunk after such an early start and two markets in a row, we returned to the hotel, dropped them off for a nap, and my lovely wife and I escaped to find other markets to explore. Our hotel, the Empire Riverside, was in St Pauli, very close to the Reeperbahn. I remember visiting the Reeperbahn in the spring of 1989 when I was working in Hildesheim. The barriers to the Red Light District were still in place, just as I remembered them, but thankfully the beefy men in the windows above the entrances (ever ready to throw water-filled balloons at any ladies attempting to enter) were absent. On the main avenue itself was another Xmas Market with little merchandise and lots of food and drink. This one also had a number of stages for big bands, all empty in daylight. We forewent the sexiest McDonalds in the world (you will have to zoom into the photo below to see what I mean) and had a fabulous handmade burger from one of the market vendors. 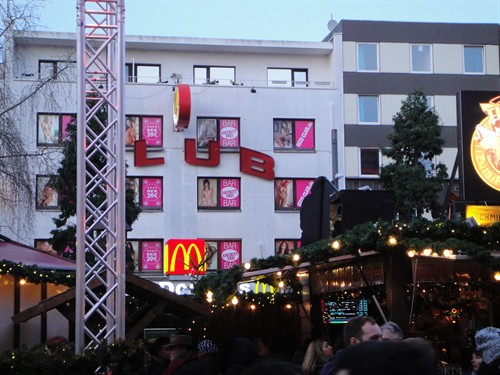 Two more Xmas Markets later, we returned to the hotel to collect the kids and think about dinner. Before heading out to a local restaurant, we had a quick drink in what the receptionist called Germany's busiest hotel bar, the Skyline Bar "20up", on the top floor of our very hotel. As hotel guests, we benefited from priority seating. External guests, on the other hand, have to pre-book months in advance and queue in a snake on the hotel lobby's huge purple rug. The drinks were warm, the service surly, but the view is stunning. From this height, you get a real sense of the economic power of Hamburg and its vast, constantly-in-action docklands.

The following day, we packed our bags and drove down river to the Xmas Party venue, a cool restaurant where the chefs cook on a large kitchen counter right in front of you, and you are encouraged to participate. The organisers had laid on kids' entertainment, so everyone, young and old, had a wonderful time. As is my restless personality, I nipped out a few times to explore the area. Being just a building back from the River Elbe, the river walk was easy and the view mesmerising. My favourite urban river experience in the world has to be the Thames because of the wealth of history that lines its banks and the constant activity on its waters (both leisure and commercial). The Elbe is also up there, probably top five, but it is far more industrial and is very prone to flooding. So much so, the buildings around the party venue are connected at upper floor levels by a network of bridges to allow people to escape to higher, safer ground via neighbouring buildings.

Five Xmas Markets, four German stall snacks, three different beers, two lovely days in Hamburg and a fun Xmas party later we headed home. Hamburg Airport was not so efficient via Departures and our flight was delayed, but we had a great time and we will be back. Merry Christmas everyone!