Jamaica! "No mon, she went of her own accord!" One of the very few jokes I can remember.

This week I flew to the largest English speaking island in the Caribbean, the home of reggae and rum, and birthplace of the world's most famous runner. My transatlantic carrier was Virgin Airlines and I could not see what all the fuss is about from an Economy passenger perspective. The seats are extremely narrow with very modest leg room (Ryanair comes to mind) and there is no dedicated coat hook. Only BA does a proper coat hook, properly located on the side of the seat in front thus giving a passenger more room and flexibility of use of the drop-down table. The touchscreen seat-back TVs are simultaneously oversensitive and non-responsive, and the entertainment system is thereby aptly named after a person of the fairer sex, called Vera. The flight safety briefing is fun though. However, for a nine-hour flight, a fun five-minute safety briefing does not a superior flying experience make. The flight itself was a little rough after we passed over Ireland and joined a Storm-Desmond-fuelled, stomach-churning, white-knuckle-ride Jet Stream.

The Virgin leg landed in Atlanta, the world's busiest airport (96 million passengers in 2014) and possibly one of the most boring. The architecture is dull, the interiors are plain, the retail is poor and the F&B limited. Although it is the busiest, it does not feel busy, probably because it extends over such a large area (currently five runways and planning a sixth, Mr Cameron take note of how airports should be done and stop being a "gutless" decision maker on such a strategic decision for the UK economy!) and a multitude of terminal buildings. The place was stuffed with staff, greeting people on the one hand and bossing them around with the other. It often felt as if there were more staff than passengers. By comparison, European airports are far more staff and space efficient.

The Atlanta-Kingston leg was provided by Delta ("Atlanta's Airline"), in an older aircraft to Virgin's A330-300, but offering much more comfortable seats and US-proportioned leg room. At the gate prior to boarding I witnessed a first for me. Bill Bailey changing a Boeing's front wheel! (see photo below) He simply lifted the entire plane with nothing bigger than a car-sized manual jack and changed a wheel single-handed right there on stand at the gate with an audience watching every move. A job that could that have taken 10 minutes took Bill's twin over 30 minutes. He kept his tool box a good 10 metres from the plane and had to keep strolling back and forth for tools. He must have used the entire box by the end of 30 minutes. Further US inefficiency? At one point he even had to drive off in his buggy to fetch a missing part. He was still fiddling when we had to board, but thankfully we took off and landed safely, so job well done. 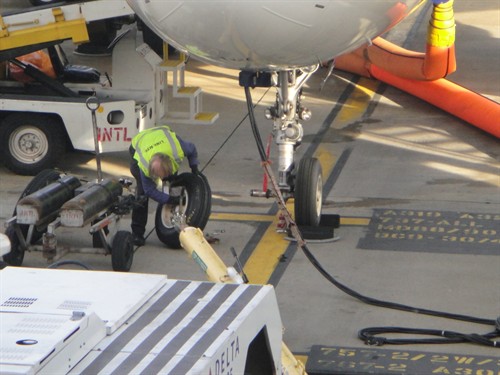 In Jamaica, my driver, Dwight Campbell, 'wid a "P"', was fascinated by the spelling of my surname. I told him my daddy can't spell, which got a laugh. The journey over The Junction (the main road from Kingston to the north coast, over the edge of the Blue Mountain National Park) at 20.00 was quiet enough. During the day however, what a ride! The scenery is stunning, with precipitous drops to the river below and overlooked by lush rain forest, but as a driver you have no time to admire the vista. During daylight hours, this narrow strip of tarmac is home to Usain Bolts-on-wheels - the buses travel faster than most F1 cars between stops and the trucks don't take any prisoners and cleave through the weedy cars on a sonic wave of the loudest hooters known to man. A thrill a minute experience!

During my three days on island (my first visit), all my preconceptions were blown away. Jamaicans are lovely. At one point we were lost in the pandemonium that is rush hour in downtown Montego Bay (MoBay). We were surrounded by every type of vehicle and swarms of pedestrians (photo below). 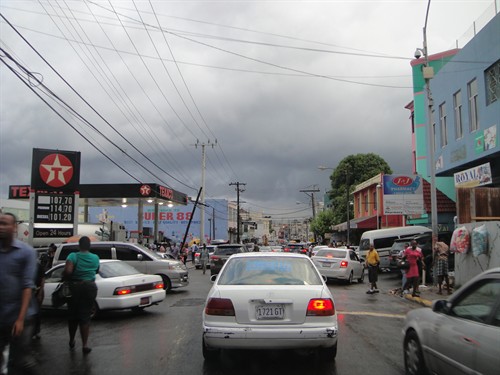 Each and every person we consulted for directions to exit the MoBay maze was delightful, helpful and friendly. At no time during my visit did I feel anything resembling any form of threatening behaviour. This warmth has surely been misrepresented in recent times (whereby Jamaica has an unfair reputation for being dangerous). Indeed such friendliness is perhaps best represented by the fact that so many celebs have put down roots here over the years, including: Errol Flynn, Sir Ian Fleming, Noel Coward, Ralph Lauren and Keith Richards. Visit highlights included a tour of Goldeneye (Fleming's home, turned into a stunning luxury hotel), a Red Stripe at Red Bones in Kingston and jerk at Scotchies in Ocho Rios. The only disappointing moment was the underwhelming experience of James Bond Beach, perhaps the smallest beach in the world (photo below) and definitely not where Ursula Andress walked out of the sea and into 007's waiting charms. 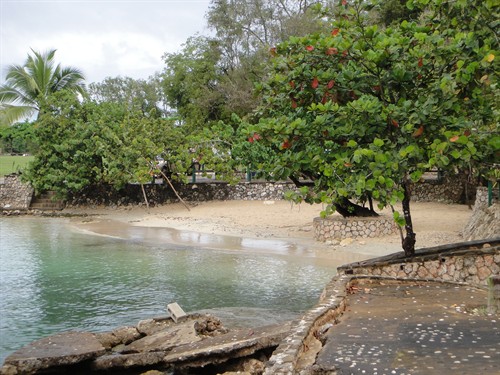 My return to the UK via Kingston Airport raised even more interest in my name, where each person reading it felt compelled to double check the spelling - a great ice breaker with the lovely ladies on check-in and at passport control. The passport lady also said she loved my nose. I called her bluff and offered a swap, which made her smile the hugest smile and blush. Lovely people. Yeh Mon!

The return flights were unremarkable (no further DIY on stand or Bill Bailey encores) and a transatlantic crossing as smooth as a 21-year old mature Jamaican rum.