Knowing that the Bakerloo line does not stop at Paddington these days due to Crossrail works, I left home a little earlier than normal and walked to the station in glorious early Saturday morning sunshine. Incredible to think that only 10 days earlier London was under a white dusting of snow and this weekend the mercury hit 26°C. Be warned all ye who may wish to travel to Heathrow of a weekend, the Crossrail works are also impacting on the Heathrow Express. Instead of departing every 15 minutes on Sat and Sun, the fast train only speeds once every 30 minutes. Good job I left home early.

We flew in an Emirates A380, first deck again, and suffered the continuous chatter of the crew on the PA. Please take a leaf out of BA's handbook and learn to say things only once and with greater word economy. Through the murk on our descent into Dubai I saw dozens of fat tankers parked in the Gulf, patiently waiting like silent bloated whales basking in the evening gloom for global demand to rise again to a new carbon slurping crescendo. On approach into Dubai International (soon to be replaced by Al Maktoum International Airport, some 37km to the southwest and stuck out in the middle of nowhere) you get a great view of the Deira side of the city. What I noticed this time were the great expanses of green so far from the city centre, where only a few years ago the desert sands prevailed. Clearly, given the murk, such terraforming is having little impact on the dust, swirling sands and heavy humidity.

On check-in at the hotel, I was upgraded to a room with a 'steam-bed' ("Is Dubai not hot and steamy enough already?", I asked), which turned out to be a steam-bath, or more accurately a large walk-in, hammam-themed rain shower, large enough for six to sit on the marble surround-benches and watch another four shower in the middle. And the wasted space did not end there. The room lobby area was immense, but at least it had a dual purpose - as a wet area for those entering and leaving the hammam room, and as a catchment area for the cascading water from the single sink. The single sink was located in the middle of the room, dividing the wet area from the cupboard area and accessible from both sides. The single sink itself was large and the single tap was positioned so close to the single sink's edge that half the flow spilt over onto the counter and into the unfathomably, purposefully-designed gap between the sink and the counter, resulting in pools of water collecting on the wet area floor. Who designed this room?

Unfortunately my critical observations on the room and the hotel don't end there. The sound proofing between rooms and in the meeting rooms was the equivalent of acoustic paper. The lighting in the room defied all logic, with multiple floodlights around the bedhead, but no lighting to shave by and only one small angle-poise on the desk - two areas where my aging eyes would appreciate some decent illumination. The desk had only one socket, the WIFI was weaker than my wife's coffee (especially in the meeting rooms where WIFI is usually a critical success factor for anyone on business), and the standard of housekeeping was very poor. These issues seem to resonate with my last visit to Dubai in January 2016, when I stayed in a lower level brand of the same operator on the opposite side of the Creek. Finally, the wardrobe facility was smaller than tiny, with barely enough room for five loaded hangers and no door. I have no idea how a lady would cope, never mind a couple together in the same room. It is not clear to me how such a bedroom design fits with the resort typology of the property, whereby most travellers are probably couples and will no doubt bring a sizeable amount of clothing for their luxury hotel experience. Where do they hang everything? Perhaps this is why, as a single businessman, I was upgraded to the most inefficient room in the house.

On the plus side, my room had direct access to the lush gardens (so much for the "request to save water card" in my room) and Creek views. Having slammed my own room, I have to own up and declare that having seen one of the standard rooms these look almost perfect - good proportions, two sinks, ample wardrobe space (still no door though), sensible furniture and celebrity lighting.

On my last afternoon in the emirate, I took the opportunity to visit some recently opened new hotels. The Palazzo Versace (some seven years or more in construction) is splashed here and there with Versace colour inside, belying the dull exterior. The one-time proposed air-conditioned beach has been value-engineered into a mini marina, and one of the three restaurants is a quarterly pop-up for roving Michelin chefs. Emaar's new Rove concept (mid-market, very limited service, contemporary style) has smaller rooms than my "steam-bedded" room, but much larger wardrobe space (still no door though). You wait 23 years (I first visited Dubai in 1993) for a Four Seasons Dubai, when all of a sudden two open in less than 12 months of each other. The Beach property is fairly standard, but the DIFC property is a great example of how to cram all the trappings of five-star into a tight space (formerly an office block). I particularly loved the bar/pool deck. 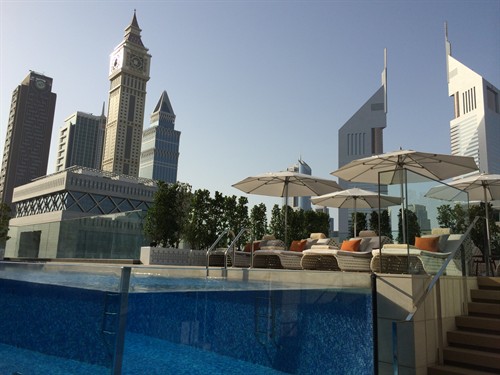 One evening I was invited to a most extravagant fish and chips dinner (black cod and truffle fries) in a new Zuma-emulator restaurant perched on top of an older hotel - huge room, very trendy, but the food was no threat to Zuma.

For the first time I decided to try the Dubai Metro - very smooth, very clean and very quick, but I was the only "tourist" on the train. The over-ground stations are somewhat oversized, requiring a lot of AC, and I see more and more Energy Solution Centres around the city as a result (also known as district cooling plants). I took the Metro to Union, where some years ago we worked on a mixed use master plan to assess the highest and best use for the air space above the new station. They chose none of the options we assessed, and far more sensibly landscaped the square into a lively community park. I walked from Union Square to the former InterContinental Deira hotel on the Creek, the location of my first ever night in Dubai all those 23 years ago. Although Radisson Blu is now running the property, many of its original features that I became so fond of over multiple stays in the 1990s are still there and the property celebrated its 40 birthday in 2015. It must be one of the oldest surviving buildings in an emirate that is in a perpetual state of change and in a constant hurry to build new and bigger and better. A little heritage is not a bad thing, even for Dubai.

In 1993, the taxis were huge, inefficient, gas guzzling American jalopies. Today, these monsters have been replaced by smaller, fuel-efficient Toyota Corollas. However, the Emiratis' love for things American is not all dead. The roads are noticeably American and have the signature of US master planners all over them - huge intersections (including one roundabout near Arabian Ranches that is nearly 1km in circumference), pointless one-way systems and impossible to cross, wide, multi-lane roads that slice and dice the city and destroy any chance of communities evolving. Perhaps consideration could be given to allocating some future road planning to the much more land efficient and publicly minded European planners.

Whilst I was away, Leicester City FC lifted the English Premier League trophy on their home ground in some style by beating Everton 3-1 (fiesta time in my old university town and the place where I met my wife nearly 30 years ago), and the long-serving oil minister of Saudi Arabia was replaced as the Kingdom seeks to adjust to the new paradigm of oil at USD50 per barrel - a big talking point throughout the conference I was attending. How will the region adjust to a post carbon economy? More European style roads and less wasteful hotel design might be good starting points.