The day before my first trip to the north of England in many a year I had been invited to play golf at Centurion Club by its Club House interior designer. This was my first time hitting a golf ball in over two years and it showed. Despite extra time on the range, my round was singularly unimpressive and drew the harsh, but brief, critique of our former-man Paul.

By way of example, on the 13th hole my wayward tee shot (a recurring nightmare for yours truly) dug its way into the side of fresh mole hill in the deep rough. Several hacks later, the half-mud-encrusted ball span lopsidedly back onto the fairway, where my party took pity on me and allowed me to clean my sphere. End result, one demolished mole hill (invoice to greenkeepers to follow), much hilarity and 13 shots added to my score card. On the 14th, I went for a Don-Johnson-Tin-Cup-shot down a tarmacked path in the hope of recovering some territory from yet another rough-bound tee shot. For some reason in Tin Cup the ball bounced off into eternity much to Mr Johnson's delight, and yet in real life my shot bounced twice, hit a stone and pinged into more rough further up the hill.

Best hole of the round? The 17th, par three. My drive into more rough was followed by a sublime chip onto the green, followed by two smooth puts = a bogey! The net result of my expeditions through the Hertfordshire countryside was a round of 145, hence Paul's searing evaluation of my efforts. On the plus side though, he advised that the maximum number of shots permitted per hole is only 12, which means that my final score must surely have been 144! Still, it was a great day out and my fellow players were wonderful and did not mind my rough patches. I could not stay for the late-lunch/early-dinner and headed into London for a meeting in Notting Hill followed by a burger at the Electric Diner (the thick-cut bacon giving it away as a Soho House venue).

I travelled to Manchester on the train via Wilmslow and back via Macclesfield (my home for much of my childhood), and Virgin's timekeeping was immaculate (train travel is such a joy when it works). In Manchester, we were greeted by standard operating procedure weather for this Northern Powerhouse, rain. I remember the endless days of rain as a kid, walking or cycling in the stuff to and from school every morning and afternoon.

My purpose of visit to Manchester was the Annual Hotel Conference (AHC) and as an AHC virgin this was my first time to the event. The host hotel was bursting at the seams for the first few plenary sessions and for lunch on the first day. It was hugely popular and many congratulations to Jonathan and the team for growing the conference into a leading event for the UK. The space was so tight that a breakout area close to the main hall had been laid out in the manner of airline-style seating facing a TV monitor, which relayed the larger plenary sessions to those who could not fit into the main auditorium.

Although the host hotel acquitted itself well in terms of logistics and layout for such a large gathering, the lunch on the first day was totally unexpected. It was a classic set up that any parent would recognise as standard kids' birthday party fare - sausages, wedges and pasta - hardly the cuisine with which to impress 800 hotel gurus. Lunch the second day was a vast improvement, with some chicken and salads in plastic cups.

Much more fit-for-purpose was the venue for an evening drinks event. Our hosts, an architectural studio and a procurer, chose the Refuge bar and dining room at the newly refurbished and renamed Principal Hotel. I have loved this hotel since I first visited it for valuation purposes back in the 1990s (then named the Palace Hotel; the imposing architecture, rich sense of place, carefully preserved interior and sensitive restoration of a grand old lady of Manchester have stuck with me ever since). This Victorian, red-brick masterpiece was first developed in the 1890s as offices for Refuge Assurance. Subsequent extensions created an imposing edifice which Refuge Assurance left to move into more modern premises in 1987. The building lay vacant until 1996 (having at one point been considered for conversion into a concert venue for the Hallé Orchestra), when Principal Hotels acquired the site and converted the property to hotel use.

Unfortunately, I did not stay at the Principal. I had booked one of those branded budget hotels not too far away. After a busy day travelling, listening, networking and drinking at the Principal, I finally made it to my hotel at around 20.00 and tried to check-in using the automated machines. Despite inputting all the right data and the machine recognising my booking, it would not check me in and instructed me to join a queue of four being served, very slowly, by a single receptionist. It took more than 30 minutes to check-in and I was late for my dinner engagement. My room was perhaps the largest branded budget hotel room in England. It measured at least 35sqm and there was an area of 'No Man's Land' between the bed and the window that must have been in excess of five metres long - an area of nothing, no furniture (save for a sofa under the window), no decoration and no obvious purpose. That said, you could easily fit another couple of double beds in the space and turn it into a mega-family room. I wonder if they charge the same price for seven guests as they do for one?

It was great to be in Manchester again after so many years away from the North. It has become a very busy and dynamic city in my absence, with streets buzzing with life even at midnight and an eclectic mix of new construction taking place in old warehouses and cleared sites. It may not have as many cranes as London, but it must be a close second within the UK. 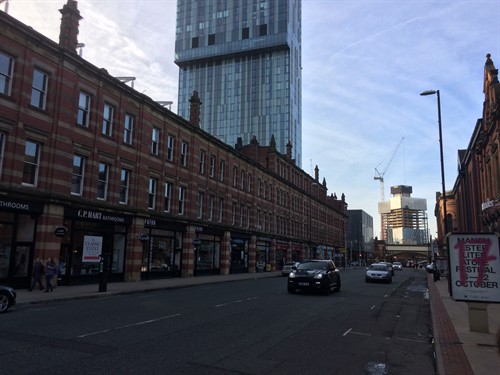 By way of sign off, your blogger blogged this blog as the sky in London, within minutes, eerily turned a dark shade of yellow outside his office window. Spooky! A great precursor to approaching Halloween, but scientifically explained away as dust from the Sahara borne by x-Hurricane Ophelia. Happy Halloween everybody.