It has been 12 months since I visited the birth place of Aphrodite and my lovely wife. Last summer the effects of the infamous banking "haircut" were very noticeable (lots of shops had closed down) and Makarios Avenue (Nicosia's Oxford Street) was a desert. During the good times, this main avenue was thriving and bumper to bumper with flash cars and Harleys.

This summer, Makarios Avenue has a few more occupied shops, but they are mostly small independent stores selling non-branded fare. On the downside, the big Debenhams that anchored the centre of the avenue finally succumbed and is now also closed. The parallel street of Stassicratou (the Bond Street of Nicosia), which had survived quite well last year, now has many empty shop fronts too, especially those of the big brands (Louis Vuitton, Fendi, Timberland).

There are many examples of unsustainable "good time" projects in the capital. The Buddha Bar has closed, the Hard Rock Café (which opened for a few months this spring after a long gestation period) is now closed, the Zaha Hadid designed main square (Eleftharia Square) has not seen a spade in over 12 months (see photo below) and the Jean Nouvel designed apartment building overlooking the square stands majestically complete but empty (although I do like the new plantings in the pigeon holes around the façade). 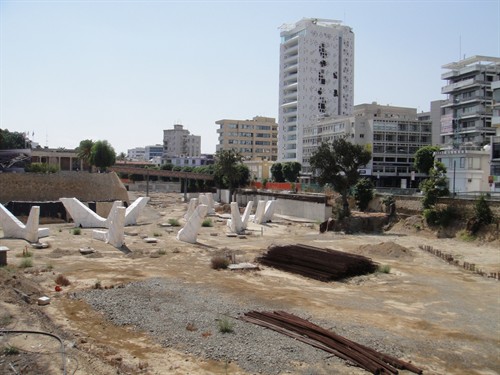 Our two weeks in Cyprus coincided with the hottest weather this year, often over 40ºC. We compensated by spending our afternoons by the pool at the landmark Hilton Nicosia. Lovely weather, great service, but even this iconic hotel is starting to show the effects of the "haircut", with some very tired poolside furniture and umbrellas that flew into the pool because the new weights are too light. That said, my son and I had lots of fun diving to fish out the submerged pool furniture.

The economic indicators for Cyprus do tend to reflect the perception one gets on the ground, with GDP expected to shrink a further 4.8% this year, inflation at 0.4% and unemployment to increase to 19%. Lots of charities have been established to help the needy, including sandwich donations and a drive to fund pencil cases for the new school year. Other "haircut" factors we picked up during our stay included: a larger number of people are now seeking employment opportunities abroad; students studying abroad are not returning home as before and are seeking work in the land of their studies; and there were noticeably fewer Porsches and Ferraris compared to previous years.

So is it all bad news? No. There are some positive signs. The old city centre of Nicosia, within the Venetian Walls, is being rejuvenated as retail and entertainment entrepreneurs relocate from the traditional high streets to the old centre where rents are lower. The place was buzzing! It is also good to see that the Fat Cats of Cyprus (the lawyers and accountants) can still afford their large office buildings and to run their front door water fountains even in the hottest of weather and coldest of economic climates. This would suggest that the legal and accounting professions that thrived on the very off shore activities that caused the "haircut" in the first place are alive and well.

Still, it could be worse. At least the best kebab shop in Cyprus is still open and still the best. Long live Pikis Kebab shop!