In the five days prior to Italy I spent much of my time in the company of my lovely wife in her temporary overnight accommodation in Central London. It offered room service, a la carte menus, en suite facilities, satellite TV, a large balcony and wonderful green views of Lords Cricket Ground. If it had not been a hospital, it could have been a very pleasant break from normal life. As it was, it was a hospital, de haut de gamme, with much of the gamme  failing to meet its haut  reputation. The food, when it arrived (usually late and uncoordinatedly hours after pain relief was dispensed), was poor (towards the end I even went to local restaurants to bring takeaway for my taste-starved lovely wife). The revolving nurses did not seem to be on the same page, despite having extensive booklets of notes, and the doctor's final visit did not materialise as planned and the patient had to be discharged without his final visual inspection. Still all is well, thanks to the celebrity Cyst King's skilful hands, and my lovely wife is back in the bosom of our sunny home (glorious weather these weeks). 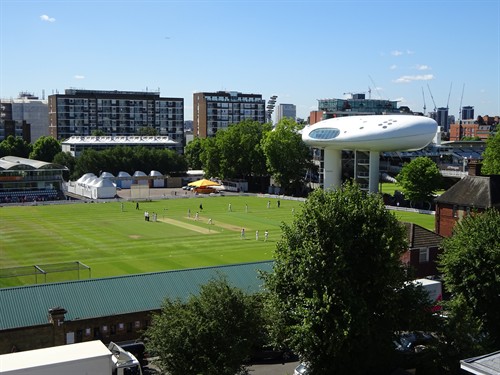 Only because it offered the best times, I decided to go against my own beliefs and chose to fly Ryanair to Pisa early on Monday morning. I often advise those who might listen that Ryanair is a lottery not to be undertaken lightly, as too often you lose. And, I lost again. The flight was delayed an hour whilst we were still in the terminal and again when on board. At first the second delay was to be a gobsmacking two and one quarter hours, but this was cut to an hour eventually. We thereby landed in Pisa two hours late (without even a simple glass of water by way of apology) and waited over 45 minutes for the luggage to arrive.

My pick-up was waiting patiently in the arrivals area and we drove to the hotel, where a scene from the Godfather awaited me - a reception committee comprising: the aging patriarch, the guy with dark glasses (indoors), the Lucca Brazzi muscle man (aka the Colossus of Pisa), the man with no voice and of course the sharply dressed sole English speaker who introduced himself simply as the Wedding Planner. Having arrived three hours late and to be faced with such a daunting array of starving gentlemen, you can imagine how intimidating this surprise reception was for a simple Englishman. As it was, we quickly got to know each other through the lingua franca of French and my hosts turned out to be very sweet and charming and incredibly hospitable hosts.

Quick thought on the Ryanair delay. They must build-in a vast amount of spare time into their scheduling because during our time on board going nowhere slowly, my window seat afforded a perfect view of the plane being serviced on the next gate. The baggage handlers provided high entertainment in inefficiency. Cases dropped all over the place, including a massive parcel (the size of a bicycle), which fell off the trailer as it finally set off for the terminal. Judging by the use of trailers, it would appear that the handlers only go to a plane once all the checked-in luggage is on the outbound trailers. At the plane, the inbound luggage was unloaded first and sat on the inbound trailers until the outbound luggage was fully loaded (a process that was further delayed by the overabundance of carry-ons that needed to go in the hold too, whereby these could not be loaded until all the passengers were on board and created further delay as handlers missed carry-ons resting on the tarmac and right under their noses). Only then, once the luggage hold doors were closed, did the inbound luggage finally head off to the terminal (with bicycle-sized parcel precariously perched and still unstable on its final journey). It all took well over 40 minutes to handle the luggage alone. It is therefore no wonder that one has to wait so long for one's luggage on arrival. Surely there is a better way. There is. Don't fly Ryanair unless you absolutely have to.

I left London in glorious sunshine (even the North Sea looked inviting, still as a mill pond, not even the wind farms turned) and arrived in Tuscany over white-capped waves and under loamed rain clouds.

During my time in Pisa, aside from site visits and meetings, I saw parts of the city centre and visited an historic palace hotel in Livorno (the latter even had a trophy on display in the lobby, originally paid for by the good people of my county of birth, Devon, small world). The main road from Pisa to Livorno is called the FiPiLi, the Firenze-Pisa-Livorno Highway (I asked why not LiPiFi and the answer was that the cities are listed in order of importance, so there you have it). We took the other road back to Pisa, the trans-Italian Via Aurelia, which dates from Roman times (circa 241 BC to be precise) and passed directly in front of my hotel, not that my hotel dated from Roman times. Quite the contrary, it was very modern and comfortable indeed. In keeping with its military past, along the modern day Via Aurelia between Pi and Li lies the vast Darby US military community. I am uncertain as to what the difference is between a base and a community, but, suffice to say that behind the webbed fencing I could see the tops of hundreds of parked vehicles in desert camouflage livery. Worth noting that Pisa International Airport is also a military installation. All very Roman Empire along the Via Aurelia.

My walks around Pisa took me along the River Arno (beautiful, especially at sunset, but somewhat sadly without any waterside bars or restaurants from which to enjoy the view), over bridges (including the Ponte di Mezzo, venue of the highly popular annual Battle of the Bridge event, hosted on the last Saturday of June (I just missed it by just a few days) and comprising two teams who push a large iron cart against each other - a kind of Pisan tug-of-war, if you will), through the tiny backstreets (very quaint and historic, Pisa is older than Rome) and into the Campo dei Miracoli (proclaimed a UNESCO World Heritage Site in 1987), home to the iconic Leaning Tower of Pisa. The tower of unintended-leaning-but-highly-photogenic consequences is in fact the campanile (a freestanding bell tower) of Pisa Cathedral built in the 12th century. As expected, the Campo was full of paparazzi dilettanti  attempting to push the latter back up-right via a panoply of photo-lenses. For fun I walked back to my hotel like a legionnaire of old along the Via Aurelia from Pi central to Pi outskirts. 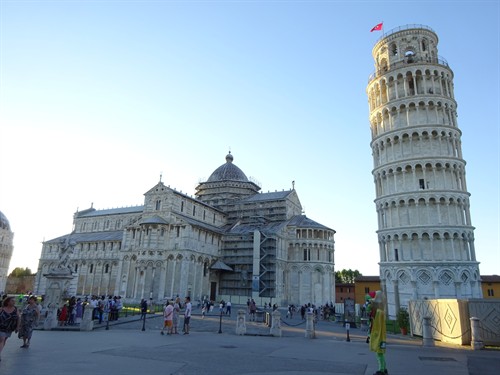 I was also driven east along the FiPiLi to Cascina to visit another hotel. Cascina is home to the European Gravitational Observatory, also known as Virgo (whereby Virgo is within EGO and Virgo is in fact "the detector for gravitational waves consisting mainly a Michelson laser interferometer made of two orthogonal arms being each 3km long"). Very high brow and very fitting for Pisa was the birth place of Galileo Galilei (1564-1642, the father of heliocentrism and a student of gravity, and perhaps reborn as Sir Isaac Newton (1642-1726), who surprisingly was born only 11 months after Galileo's demise).

My return to London was with easyJet (beside a very fragrant young chap in desperate need of a shower and several squirts of deodorant), which left and landed on time, and even the luggage was on the carousel. I am not sure how they handle their luggage and I cannot say for sure if the luggage would have been on the carousel if it had not been for the eternally long passport queue, which took at least 40 minutes (funnily enough, the time it takes to unload and reload a Ryanair plane and perhaps even an easyJet too). The mystery of luggage is surely something that Virgo could perhaps explore as it is a very grave issue of the deepest gravity for any would-be flyer.