The Caribbean - islands of great beauty, easy living and delicious rum. Last week I flew to St Lucia on a belly full of Jamie's Full Monty breakfast from Gatwick North Terminal; you need a full tummy for a 9hr flight. Our departure was delayed 20 minutes as the captain and tech-boys tried to reconcile an inconsistent fuel reading (where does missing fuel in a jet go?).

I left 4ᵒC in London to be greeted by 28ᵒC on St Lucia and glorious sunshine. We were driven to our hotel via the capital Castries, wherein a massive mobile apartment block from the banlieue of Paris dominated the skyline, more commonly referred to as a cruise ship. It overwhelmed the harbour, the city and would put even the Pitons to shame. 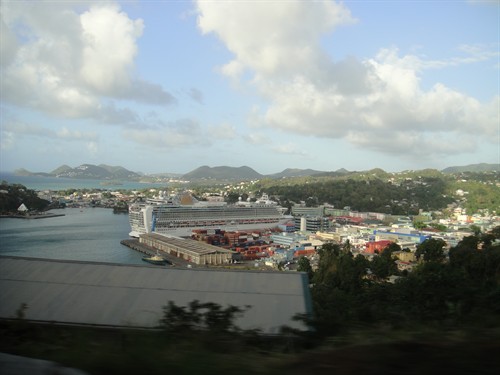 Our hotel was nothing to write home about (the bar closed at 9pm for goodness sake), but during the day it did host the delightful Virgin girls (crew). During my four days on island I experienced a good variety of local fair: cassava bread with fresh ginger (refreshing and filling), chicken roti in Soufrier, Creole breakfast (fish, a bake, cucumber salad and coco tea). On the project site I drank from a freshly macheted coconut, sucked on fresh coco beans and ate beach almonds (Shaun, sorry about the blister on your finger).

This trip threw up a few new technical terms that could make it into a report one day: "off-load system" (aka a WC), "poo-park" (aka a sewage treatment plant) and "donkey-kong tourism" (it does what is says on the tin, but if you need a full definition just drop me a line). In addition to interesting food and new technical terms, the island also offers the Bat Cave and Superman's Falls.

The site was gorgeous, lots of built and natural heritage (a former plantation), a 200-metre beach and a developer's delight - fabulous valley walls. Hopefully this project will be rescued as envisaged and help to reenergise an island that has seen more than its fair share of changes (Discovery Bay is now Capella Marigot Bay and Jalousie Plantation is now Viceroy Sugar Beach) and false starts (the Paradiso project and multiple projects along Rodney Bay).

I was lucky enough to see the UNESCO listed Pitons and they are truly remarkable, no wonder the local beer is called Piton and they are the symbol of this beautiful, mountainous and colourful island nation. In many ways, it is a shame that the hotel between these volcanic plugs does not accept the local volcanic sand and feels compelled to import stark white stuff from Guyana.

The flight back was remarkable for the lack of Virgin girls and a Premium Economy seat up against the bulk head that was unbelievably uncomfortable, and the broken microscopic TV-on-a-stick did not help my mood. At least the return was only 8hrs (a combination of BA pilot magic, the earth's rotation and a gusty gulf stream).

I returned to London after four full days with clients (honest, no pool time even) to hear the earth shattering news that Iraqi forces had retaken Tikrit and Jeremy Clarkson was suspended for forcefully refusing a cheese sandwich. Maybe Mr C needs to calm down and visit the Caribbean, I hear the local "gummy-bears" are good for those of a tense disposition.