Sulaymaniah (affectionately referred to as Suli by the Kurds) is Kurdistan's second city by population, the region's industrial and manufacturing heartland, a cultural centre and was one of Iraq's leading tourist destinations. It is in effect Barcelona to Erbil's Madrid. Suli lies on an elevated plateau (800m+ above sea level) and is surrounded by hills and mountains. Wherever you are in the city you can see the encircling mountain ranges. In summer (as on this trip), these ranges appear sandy yellow, but when you drive into the hills, you can see that they are not bare mountain slopes after all. They are in fact covered in thick grass that has dried out under the hot summer sun, which turns incredible shades of green in the spring rains.

Suli developed into a leading tourist destination because of its relatively mild summer weather compared to the remainder of Iraq, snow in winter and because of its interesting and highly accessible nature (forests, valleys, rivers, lakes). In order to consolidate its position, the dynamic business families and local authorities of Suli are investing heavily in additional facilities, including: Chavy Land (a very large amusement park), parks inside and outside of the city limits (including the conversion of a Saddam-era barracks into one of the largest urban green spaces in the Middle East), a mixed use tourism development at Dukhan Lake, and infrastructure improvements into and around the surrounding mountains.

The most memorable feature of my visit to Kurdistan was its people. They are definitely not Jihadi Johns. They are incredibly welcoming, well educated, open minded, generous, understanding, dynamic and willing to consider new ideas. They are constantly seeking to improve and to work together to establish a strong and diverse economic base.

My hosts epitomised these characteristics and were the loveliest people, especially their business development director (who escorted me to most meetings in Suli and Erbil), who is now fondly known as Non-Jihadi John.

I met a huge variety of people during my stay, from government officials to local entrepreneurs to large multinational oil and gas companies. All felt the future for Kurdistan was positive and the city is at the start of an exciting journey. Any preconceptions I had were quickly dismissed driving around Suli. It is clear that the people are extremely respectful of their city and each other. It is modern, clean, well maintained, drivers are considerate and everyone is friendly. The old town (which includes a beautifully restored British colonial era office building, the old Saray) is buzzing with life and trade. Not exactly akin to the historic medinas of Marrakech or Tripoli, it is much more modern, but no less intriguing and bustling.

There are few international standard hotels in Suli, but with the level of interest and investment planned for the city, this will change. New projects include: a cargo village at the airport, a new passenger terminal, new cement and brick factories, more oil and gas exploration, new urban centres on the outskirts of the city, large scale retail developments and new office towers. The most remarkable hotel in Suli, and all of Iraq probably, is the Grand Millennium. The hotel was developed on an island site, comprising a sizeable hill, and was designed with hints of Burj Al Arab in Dubai - a tall 23-storey tower with a slight curve on one side. This icon dominates the cityscape and is visible from miles around. At night it is a shining beacon of optimism reflecting the city's encouraging future. 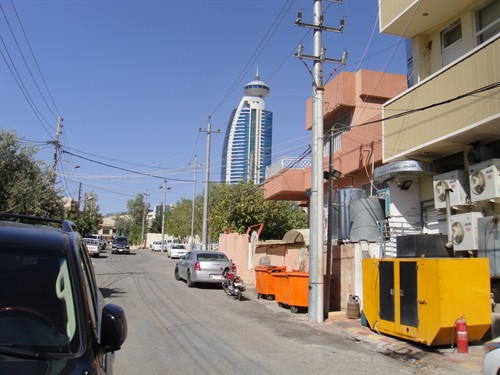